"The Crucible" by Theatre Coup d'Etat at Zion Lutheran Church 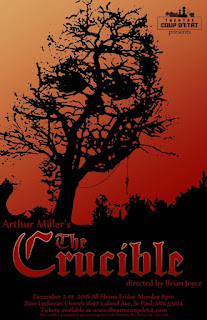 I first saw Arthur Miller's 1953 play The Crucible last spring at the Guthrie, and was wowed at how this story about the infamous Salem witch trials of the late 17th Century, during which twenty people were put to death for the crime of witchcraft, speaks to the issues of the day. Things have changed a lot in the last year and a half, making the play's themes of religious fanaticism, mob mentality, and persecution of people who are different even more scarily relevant. How terrifying to live in a world where one person's false accusation can incite mass hysteria and result in the persecution of innocent people, a world that sadly isn't too far from the current reality. I'm not saying that our president elect is Abigail Williams, but I, and this excellent and intimate production by Theatre Coup d'Etat, am suggesting that we need to take a breath and look at the facts before we rush to condemn someone based on a spiteful rant. The Crucible dramatizes one of the greatest failings of the American, or rather pre-American, judicial system, and 60 years after it was written still remains a cautionary tale.

The story begins when the Reverend Parris discovers several young women, including his daughter Betty and niece Abigail, dancing in the woods. Yes, dancing! Betty is afflicted by a strange illness that is blamed on the family's Barbadian slave who is accused of conjuring spirits. In what amounts to a harmless prank gone horribly wrong (never underestimate the power of teenage girls), the girls continue to accuse more and more people of witchcraft, who are given the option of confessing or hanging. The whole thing spirals out of control and Abigail soon accuses the wife of her former employer/lover John Proctor, an honest and well-respected woman. John attempts to defend his wife but is powerless against the mass hysteria that has overtaken the community. But somehow in the midst this devastating event, he's able to face the truth and become the best version of himself.*
In one of the best examples of site-specific theater I've seen, The Crucible is performed in a church, which makes the themes of religious fanaticism ring even louder. Scenes take place in multiple locations as the audience watches from the pews (which are not built for comfort, but at least they keep you alert for the 3-hour show). The play begins in the poor afflicted girl's bedroom at the back of the sanctuary, while the Proctor home (where they actually eat stew and knead bread dough) is set up in the area just in front of the pews. The best use of the space is in the trial scenes, with the judge standing at the pulpit often talking to us the audience as the trial's audience, the accusers carrying on in the box on the side, and some of the citizens sitting in the front pews.

Director Brian Joyce leads the large and capable cast, highlights of which include James Napoleon Stone as a strong and sympathetic John Proctor; Jamie White Jachimiec, whom I don't believe I've ever seen before but who truly impressed with her very real and heart-breaking performance as John's wife; Kaylyn Forkey as main accuser Abigail Williams; Lauren Diesch as the Proctor's employee Mary Warren who unsuccessfully tries to break free of the accusers; Charles Numrich as the unforgiving Governor Danforth; and Kevin Fanshaw as the minister John Hale who has second thoughts about his participation in the proceedings. All are appropriately dressed in long dresses and bonnets or short pants and jackets (costume design by A. Emily Heaney).

The Crucible continues at Zion Lutheran Church just off Snelling and University in St. Paul through December 19 - a well executed site-specific, intimate, and sobering production of a classic that's never felt more relevant and necessary.


*Plot summary borrowed from what I wrote about the Guthrie production last year.