"The Norwegians" by Dark and Stormy at Grain Belt Warehouse 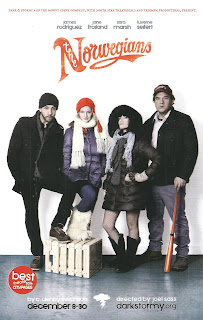 To close out their fourth season, Dark and Stormy Productions once again brings us an anti-holiday selection. Except that this one takes place in winter in Minnesota, so it's pretty holiday appropriate, even if it is about two women who hire two Norwegian gangsters to kill their exes. Austin-based playwright C. Denby Swanson was inspired by her time in Minnesota at the Playwrights' Center* to write this darkly funny play that pokes fun at all things Minnesota in a fun-loving way. The Norwegians is a cross between a Prairie Home Companion sketch and an episode of Fargo, with more edge than the former but without the latter's ominous cloud of despair. Director Joel Sass and his dynamic and dynamite four-person cast bring this wacky story to life in an intimate setting, providing a truly entertaining 90 minutes (no intermission!) of theater. And as if all this wasn't enough to make me love the play, any mention of the 1991 World Series Champion Minnesota Twins (or 1987 of course) is a surefire way into my heart!

The play switches back and forth between two timelines (with some really clever effects of sound, lighting, and movement) - the present, Olive's (Jane Froiland) initial meeting with Norwegian hit men Tor (Luverne Seifert) and Gus (James Rodriguez), and the very recent past, Olive meeting Betty (Sara Marsh) at a bar and commiserating about their horrible exes and the desire to kill them. But unlike most people after a break-up, Olive and Betty mean that literally. Olive gets the Norwegians' number from Betty, and as the two timelines progress they eventually meet up and come to the surprising, disturbing, ironic conclusion.

I love the way The Norwegians plays with time in a way that keeps the audience on our toes, but isn't confusing. The time shifts don't feel like a gimmick, but rather are an efficient and interesting way to tell the story. And of course there are plenty of Minnesota and Norwegian references; I lost count of how many times Tor says "uff-da," or claims that the Norwegians did everything first and better. I brought my Norwegian teacher friend along in case any translation was needed, but it wasn't. The humor plays to non-Norwegians just as well.

This is the fourth play Dark and Stormy has staged in their studio space in the arts building that is the Grain Belt Warehouse, and each time the arrangement has been different. For The Norwegians, audience members are seated in two rows along two sides of the space, slightly tilted towards the windows where a vintage jukebox is perched against the wall. The only other set pieces are a table and chairs, but there's not much room for anything else as the actors pace the small space in front of us. The Minnesota winter-chic wardrobe provided by A. Emily Heaney completes the look, with aforementioned clever sound and lighting effects provided by Aaron Newman and Mary Shabatura, respectively.

The Norwegians continues through December 30. The small space fills up fast, so get your tickets in advance to see this very funny, very Minnesotan, very well done play.


*If you don't know about the Playwrights' Center, you really should. It's because of them that theaters here and around the country have such great new plays to choose from! Read about my recent experience at PWC here.