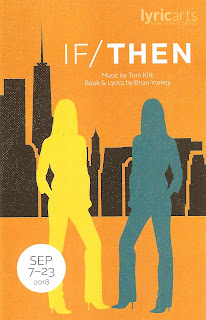 2014 saw the Broadway premiere of a new original musical written by the creators of the Pulitzer Prize-winning Next to Normal (Brian Yorkey and Tom Kitt) for two of the original stars of the Pulitzer Prize-winning RENT (Idina Menzel and Anthony Rapp). I went to see If/Then with super high expectations, which is probably why I was underwhelmed. It's not going to win a Pulitzer (few musicals do, only nine if you want to get nerdy about it), in fact it didn't even win a Tony. But the more I listen to the score and see the show (I also saw the national tour a few years ago), the more I like it. It may not be a brilliant musical, but it's a good one, and it's original, fresh, and modern, which is hard to come by these days. Lyric Arts in Anoka was lucky/smart enough to snag the regional premiere, and I'm quite impressed by what this little community(ish) theater in the 'burbs was able to do with this complex show. A solid cast (and one outright superstar in Kate Beahen), a clever design that captures the spirit of NYC, clear direction by Elena Giannetti, and interesting movement around the small stage bring out the best in this smart, funny, moving, and thought-provoking new original modern musical. I can't ask for much more than that.

Here's a brief plot summary, borrowed from what I wrote about the touring production a few years ago:

The Sliding Doors-esque plot follows Elizabeth, who has just left Pheonix and an unhappy marriage to start over in New York City. She's a pragmatical cat (a woman after my own heart) who believes in facts and data and analyzing all possibilities. But that strategy doesn't work as well in life as it does in urban planning, and based on one small choice, Elizabeth diverges into Liz, who meets a handsome army doc, gets married, has children, and teaches urban planning, and Beth, who has a successful and fulfilling career as a city planner and unsuccessful dalliances with her ex and her boss. While you can't easily change hairstyles on stage like you can in a movie, you can don a pair of glasses and subtly change wardrobe pieces to quickly and easily identify which Elizabeth we're watching. The two realities are cleverly and seamlessly woven together, making it easy to follow the storylines and see the parallels in the two lives. At the most powerful moments Liz and Beth merge into one beautifully flawed, strong, very real woman, as she grapples with the choices she's made and the life she's found herself in.

And here are ten reasons you should make the (really not that long) drive up to Anoka to see If/Then:
There you have it. A new original musical created by and for people with serious musical theater credentials, making its regional premiere in Anoka. Lyric Arts took a big chance with this one and it's paid off in an engaging, entertaining, funny, emotional musical. If/Then officially opens tonight and continues through September 23.