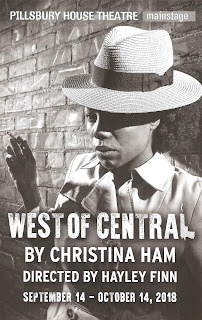 A thrilling mystery in the classic noir style set in LA in the '60s sounds fun, but add in the fact that the smart and savvy detective is an African American woman and the play deals with issues of racism, segregation, riots, and changing neighborhoods, and you have a uniquely engaging and thought-provoking new play that only favorite #TCTheater playwright Christina Ham could write. West of Central was developed at the Playwright's Center, where I saw a reading two years ago as part of their Playlabs Festival. It was great then, and it's even better now after some tweaking and fully staged at Pillsbury House Theatre with precise design. Directed by Haley Finn (who also directed the PWC reading) and featuring a fantastic cast of local faves, West of Central is not just super cool and fun, but also has some interesting things to say about race relations then and now, as well as how we choose to live where we live and where we call home.


The hero of our story is Thelma Higgens (perfectly played by Austene Van and her perfectly coiffed Afro), who runs a private detective agency in Watts with her husband Vernon Higgins (Harry Waters, Jr.). It's 1966, a year after the Watts riots, which Thelma insists is more accurately called an uprising. Thelma and Vernon don't live there, but own a home in another neighborhood, although they continue to do business in the neighborhood. One day a young white woman (Olivia Wilusz) comes into Thelma's office looking for a man named Earl, and it soon becomes obvious that Earl and Vernon are one in the same. June is the estranged daughter of real estate magnate Sidney Franklin (Stephen Yoakam), and it turns out that she has something that her father wants, which sets into motion a series of events including blackmail, murder, and lots of investigating. We also meet local cop Mac (Theo Langason), Sid's right-hand-man Chester (Brian A. Grandison), who shares a history with Vernon, and the aunt of June's murdered friend (Aimee K. Bryant) who has more to do with the mystery than she lets on. To tell you any more would spoil the fun, but suffice it to say that due to some smart sleuthing, our heroes save the day. At least for now.

On a versatile set designed by Joel Sass, six different locations are created from offices to homes in various conditions. The hard-working and efficient stage hands, with help from the ensemble, move and turn a series of mix and match pieces to create the different environments, as cool noir music covers the transitions. Lighting effects (by Michael Wangen) also help set that noir mood, and costumes (by Amber Brown) help create character and that late '60s vibe, especially Thelma's sharp suits. Everyone in the cast is fantastic and fun to watch as they navigate this very specifically created world.

West of Central continues at Pillsbury House through October 14, and like most of their work, is entertaining and engaging while also making larger statements about the world we live in.