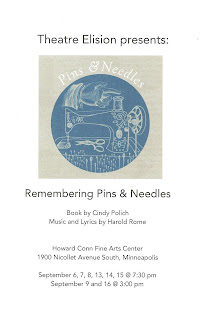 One of my favorite new theater companies, Theatre Elision, is beginning their second full season with another original piece showcasing a little known part of music-theater history. Remembering Pins and Needles does just that - it remembers the 1937 musical created by the International Ladies Garment Workers' Union that went on to become the longest running Broadway show at the time (it's now #100). With a book by producer Cindy Polich, the show includes about a dozen songs from the original and one of the few remaining comedy sketches, interspersed with explanatory dialogue about the phenomenon that was Pins and Needles. The fantastic four-person ensemble and swingin' four-person band do a great job with these fun '30s era tunes, and the songs and story of Pins and Needles have a surprising resonance today - the working class fighting for their fair share against the rich and powerful that are trying to use them and keep them down. Remembering Pins and Needles is 75 minutes of edutainment that you can't get anywhere else.

The story of Pins and Needles is fascinating and one I'd never heard before. Go see the show to get the full story, but the short version is that it was a musical created by the union to entertain and educate members and supporters, but went on to become a huge success, even performing in the White House for the Roosevelts. It was a satire of the issues facing the common people of the day, particularly the women who worked in factories and sweatshops. A way to have a little fun and bring awareness to the cause of the union. The ensemble (Christine Wade, Elena Glass, Kenyai O'Neal, and Paul R. Coate) takes turns telling this history.

And they also sing! Written by composer Harold Rome, the songs definitely sound of the era, and feature some lovely harmonies as well as clever lyrics. Highlights include "Sunday in the Park" (which is not by Sondheim, but rather pays homage to the workers' one day off), the tongue twister "Not Cricket to Picket," "Nobody Makes a Pass at Me" (a comedy highlight by Elena), and the opening and closing number "Sitting on Your Status Quo" (with new lyrics by the playwright to set the scene for the show).

The one comedy sketch presented sounds as if it could have been written today, as it satirizes those in power, who can easily silence their opponents by calling them un-American. And Paul's impression of a certain White House resident makes the rhetoric feel all too familiar.

Director Lindsay Fitzgerald keeps the show clipping along with momentum, and Music Director Harrison Wade and his four-piece band sound swell. Remembering Pins and Needles plays for only two weekends, so act quickly to catch this rare piece of music-theater history!