"Guys and Dolls" at Lyric Arts 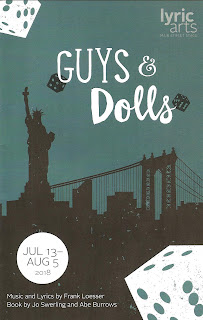 Lyric Arts Main Street Stage in Anoka is closing their 2017-2018 season with a fun and classic musical - Guys and Dolls. Is the story dated and full of gender stereotypes? Yes. But it's also chock full of great music, including many popular songs ("A Bushel and a Peck," "Luck Be A Lady," and my favorite, "Sit Down, You're Rockin' the Boat"). Lyric Arts has assembled a fantastic cast, and the show is well-staged in their small performance space. If you're looking for a fun '50s era show, Anoka is the place to go.

Guys and Dolls centers around the underground gambling business in NYC and a mission trying to save the sinners. Nathan Detroit runs the big craps game in town and is always looking for a place to hold it, while trying to hide it from Adelaide, Hot Box dancer and his fiance of 14 years. To get the money to secure a location for the game, Nathan bets big-time gambler Sky Masterson that he cannot convince pious mission worker Sarah to go to Havana with him. Sky wins the bet, but it's not quite that simple. To win Sarah's heart, he bets against the guys' souls to get them to come to a meeting and save the mission. And everyone lives happily ever after.*

Even though the two couples get married at the end of the show (because this is a musical from the 1950s, and feels every bit of it), my favorite twosome is Adelaide and Sarah, who unfortunately only get one scene together (in which they discuss men, natch). Kate Beahen and Quinn Shadko are so fabulous and perfectly cast as Adelaide and Sarah, respectively, that I wish we saw more of this pair (in fact, put a blond wig on Quinn and green skin on Kate and they'd be fantastic as one of my favorite musical theater duos!). Their guys aren't so bad either, a very funny and charismatic Jonathan Goodman as Nathan (aka Nate'n) and the smooth and deep-voiced Rodolfo Nieto as Sky. Everyone in the strong 21-person cast (yes, 21!) does a great job with their roles, big or small, having fun and speaking in a broad New Yawk accents.

The New York theme is also present in the simple but striking set (designed by Eli Sherlock). Three concentric square arches frame the stage, edges cut out in the shape of the NYC skyline, with the shape reflected in the backdrops used for various locales such as the mission. The arches are edged with tiny lights that flash and flicker, and the open space with risers in the front of the stage allow for great movement of the large cast, including some fun dance numbers (direction by Matt McNabb, choreography by Lauri Kraft). The bright and colorful period costumes (designed by Samantha Kuhn Staneart) complete the look of the idyllic retro NYC. Last but definitely not least, Frank Loesser's familiar score sounds great as played by the 9-person backstage band led by Music Director Natalie McComas.

Guys and Dolls, fun and full of great music and performances, continues through August 5 at Lyric Arts.


*Plot summary borrowed from what I wrote about the show at Artistry a few years ago.