"Jeeves in Bloom" at Theatre in the Round 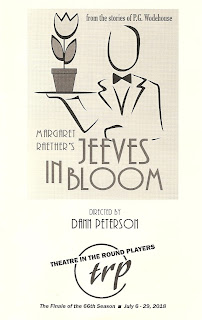 To end their 66th season, the longest running theater in Minneapolis, aka Theatre in the Round, is bringing back a popular character from a few seasons ago - the quintessential English valet Jeeves. Even if you've never read the stories of British author P.G. Wodehouse, who created the character (and also wrote some of the Princess Musicals featured in Theatre Elision's latest show), you know the name Jeeves from any number of references. The original Jeeves was an all-knowing, unfailingly competent valet to a charming mess of a young Englishman named Bertie. Playwright Margaret Raether adapted Wodehouse's stories into three plays; Jeeves in Bloom is the second produced by TRP (the third is part of their upcoming 67th season). This was my first experience with Jeeves, and I found it funny and charming and very well done by the cast and team at Theatre in the Round. It's the perfect light comedic summer entertainment.

Jeeves in Bloom sees Bertie and Jeeves traveling to the country to visit Aunt Dahlia, with Bertie's childhood chum Gussie in tow. The purpose of the visit is twofold: to aid Aunt Dahlia in a little problem she's having with her magazine Milady's Boudoir, and to play matchmaker between Gussie and his crush Madeline, who is Uncle Tom's niece and also visiting. As Gussie is more comfortable around his beloved newts than people, the latter proves to be a challenge, and upon Jeeves' advice a bit of Cyrano's tactics are employed, although it doesn't go well. Dahlia convinces Bertie to help her steal the family diamonds out of Tom's safe to bail our her magazine, which doesn't go well either as Tom is very suspicious and tends to wander the grounds at night with a rifle. And then there's the matter of the temperamental chef who quits in a huff. Through it all Jeeves remains entirely nonplussed, the calm rational one in the midst of the storm of crazy. And of course, he saves the day so that all ends well.

Jeeves in Bloom reunites the director and most of the cast of Jeeves Intervenes from a few years ago, which shows in their comfort with the characters, the actors, and the comedy. Under the crisp direction of Dann Peterson, the seven-person cast adeptly handles the fast-paced and distinctly British comedy, as well as employs charming and consistent accents (with help from dialect coach Janice Stone). John Adler is perfectly calm and polite as Jeeves, with just a hint of inward eye-rolling at the antics of his employers. Aaron Henry is ridiculous and charming as Bertie, and Dietrich Poppen creates a very distinct and original character in the nerdy Gussie. Donna Porfiri is a delight as the determined and no-nonsense (except for that of her own making) Aunt Dahlia, and David Rinzema is a lovable curmudgeon as Uncle Tom. Laura Weiher is very funny as love interest Madeline (with a real dog!), and Joel Raney brings out all the eccentricities of French chef. Together they comprise a wonderful ensemble that's fun to watch, with wordplay and physical comedy.

Set in the early 1930s, the cast is dressed in lovely period costumes, and of course they dress for dinner. I was particularly enamored of all of Madeline's dresses. The in-the-round stage has been transformed into a charming English garden with flowers, statues, and delicate table and chairs on a brick floor. And because this is Theatre in the Round, you get to walk through the garden on your way to your set. Just don't touch! (Set and costume design by John A. Woskoff.)

You can catch Jeeves in Bloom at Theatre in the Round in the West Bank neighborhood of Minneapolis through July 29, and watch for Jeeves Takes a Bow next summer. I will certainly be back for more of this charming, wacky, and very British comedy.