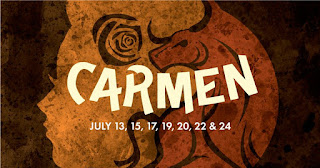 A review in brief of the final dress rehearsal of Mill City Summer Opera's Carmen, before a brief rain delay (which I hereby declare shall forevermore be referred to as a raintermission) turned into a cancellation of the performance, midway through Act II of IV: