"The Legend of Georgia McBride" at the Guthrie Theater 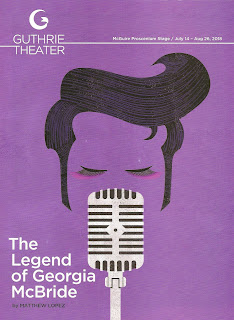 Reminiscent of La Cage aux Folles and Kinky Boots, but with a spirit and humor all its own, The Legend of Georgia McBride is a drag show with a beautiful message of finding one's identity and embracing those you love as they discover their identity. What it doesn't resemble so much is playwright Matthew Lopez's other work seen recently on #TCTheater stages, the intense Civil War drama The Whipping Man, a beautiful and heart-breaking play done by Minnesota Jewish Theatre Company last year. Which just goes to show the range of the playwright, although I think it's safe to say that Georgia McBride is the more personal work. Similar to the protagonist Casey, he found himself in a drag club in Florida, although the details of the story are different. Georgia McBride is a really fun show, and you also may learn a bit about drag performance, and rethink some stereotypes about the real people behind all the glitz and glamour of the show.

Casey is an Elvis impersonator in a struggling bar in Panama City, Florida, run by unenthusiastic proprietor Eddie. Casey and his wife Jo are having trouble making ends meet with what he earns at the bar and her waitressing job, a problem that's only going to get worse now that Jo is pregnant. So when Casey's act is bumped in favor of Eddie's cousin, a drag queen looking for work, he jumps at the chance to fill in when the other queen goes on a bender. At first, it's just performance, only this time Casey is impersonating Edith Piaf instead of Elvis. But as Miss Tracy Mills teaches him about the art of drag, Casey begins to flourish in a way he never did as Elvis. Their act becomes a hit and the trio (along with a much more excited Eddie) start making money. The only snag is that Casey has been lying to Jo, telling her he's been bartending at the club, which kind of feels like an excuse to create drama when she eventually finds out. But it allows for some great character moments for everyone involved.

If you're thinking to yourself, "but wait a minute, drag isn't just a straight man playing dress up," don't worry, that is addressed in the show. When Rexy returns from her bender, she schools Casey on just that fact, and tells him that drag is an identity, a way of being in the world, and a dangerous one for those who don't remove the persona when they go out the door, for whom the persona is who they are. And although Casey is a straight cisgender man, there is a part of him that only comes alive to the fullest when performing as a woman.

The wonderful five-person cast (although only 20% local) beautifully brings this story and these characters to life. That 20% local is in the person of Guthrie vet Jim Lichtsheidl, who can crack me up with just a look, and did so many times during the show in his performance as Eddie, who goes through a bit of a transformation of his own. Jayson Speters is uber charming as Casey; as believable as the sweet naive down home man as the glamorous drag queen he eventually becomes. Arturo Soria gives two entirely opposite performances as the young diva Rexy (a fierce dancer) and Casey and Jo's good ole boy landlord, his drag make-up hidden by a hat pulled down low. Chaz Hodges is sweet as Jo, with a natural performance that ground the comedy in something real. And last but not least, Cameron Folmar is everything you'd want an old drag queen to be - wise and world-weary one moment, full of vim and vigor the next.

As per usual at the G, the production quality of the design is top notch. The set (designed by Mikiko Suzuki MacAdams) looks very much like the back room of a bar, with a variety of beer signs adorning the walls. Walls that move offstage or fly overhead to transform the space, as it eventually becomes a glitzy drag performance space. Needless to say the costumes (designed by Patrick Holt) are gorgeous, from the simple and casual civilian clothes to the most over-the-top outrageous drag costumes, with some beautiful and elegant gowns in between.

The Legend of Georgia McBride is a sweet and fun story of love, friendship, community, and finding oneself. Continuing through August 26.