"Mamma Mia" at the Ordway Center 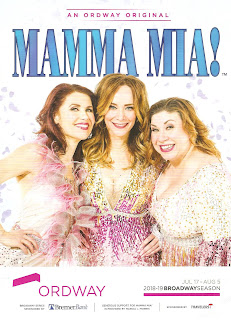 Unless you've been living under a rock, you're probably aware that there's a new Mamma Mia! movie, a sequel to the 2008 smash hit movie adaptation of the smash hit jukebox musical (which ran for 14 years on Broadway and 19 years and counting in the West End) featuring the music of '70s pop sensation ABBA (phew, that's a lot of derivatives). But are you also aware that there is a brand new local production of the stage musical playing at St. Paul's Ordway Center for the Performing Arts for just three weeks? If you're thinking to yourself, "why should I spend more money to go see it live at the theater when I can just go to the movie, or watch it in my living room in a few months?" keep reading, because I will tell you why. What it boils down to is that firstly, live entertainment is always better than anything recorded could be, and secondly, this production is fantastically fun and surprisingly moving, performed by a mostly local and all fabulous cast. If you enjoyed either of the Mamma Mia! movies, you do not want to miss this one-of-a-kind LIVE Mamma Mia! experience! But hurry, unlike movies that last forever, you only have until August 5 to see this.

Maybe it was just the high of the super fun high energy show, but watching it I almost thought the book was kind of clever in the way it weaves ABBA's greatest hits into the story of a young woman in search of her father. These silly pop love songs sort of make sense for these characters to be singing, and are almost kind of deep at times. But that can't be true, can it?! I totally fell for the story of young Sophie who, on the cusp of her wedding to the handsome Sky, reads an old diary belonging to her single mother Donna in which she finds three possible candidates for the father she never knew, and invites them all back to the Greek island where Donna runs a resort. Hijinks ensue as Sophie tries to figure out which man is her dad, while keeping it a secret from them and her mother. Add in Sophie's two best friends and Donna's two best friends, and you have a lot of boisterous fun. The search for dad doesn't go as expected, but in the end what matters is the family that's always there for you, no matter what DNA may say.

Here are ten reasons to see Mamma Mia! at the Ordway instead of (or in addition to) the new movie:

Mamma Mia! is the funnest of shows, with a gloriously cheesy poppy score and high energy dancing. But it's also a beautiful and touching story of family, with a message that while some families look different, all are valuable and important. A family can be a single mother and her daughter, or two men committed to each other, or a girl and her three dads, or the friends that are always there for you. What matters is the love that's shared in the family, not what it may look like to anyone else.

Mamma Mia! continues at the Ordway through August 5. Forget the movies and take a chance on live theater.