"West Side Story" at the Guthrie Theater 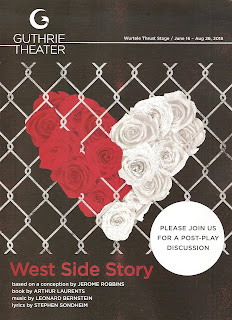 I grew up watching West Side Story. I've seen the movie dozens of times, listened to the music hundreds of times, and seen it on stage a handful of times (including the Ordway's gorgeous production last year). But I've never seen a West Side Story like the one currently on stage at the big blue building on the river. The Guthrie's West Side Story, directed by Artistic Director Joseph Haj and featuring new original choreography Maija Garcia (both children of immigrants), feels like it was made for today's world. A toppled over Lady Liberty dominates the set, and the musical's themes of institutionalized racism, prejudice towards immigrants, senseless violence, and hate born out of fear have never felt so relevant. It's still that timeless story of star-crossed lovers,* set to Leonard Bernstein's familiar, beloved, and gorgeous score, but with a cast that looks, moves, and feels like America today, for better or worse.

Taking inspiration from the original stage directions which suggests that the Jets should be "an anthology of what it means to be American," the Jets of this production are an ethnically diverse group. So the story is not the white gang vs. the people of color, but rather people whose families have been in this country for a few generations (whether they arrived willingly or forcibly, 20 or 200 years ago) vs. the new immigrants. It's the story of America. People come to this country in search of a better life for their family, and those who are already here react in fear towards the newest wave of immigrants, be they Irish, Japanese, Puerto Rican, Mexican, or Muslim. The language used by the characters sounds very similar to the language we hear every day (excluding the occasional daddio). Members of the Jets are afraid that the Sharks' families are taking their jobs. Lieutenant Shrank calls the Jets sons of immigrant scum and the Sharks spics, then says maybe I don't have the right, but we have laws, and I'll find the right. Sounding very much like current politicians who exploit laws to further their own agenda. At the tragic end of the play, Maria turns to look at the fallen Statue of Liberty, crashed to the ground like her American dream. She hoped for a life of opportunity in America, as so many do, but instead found death. The small glimmer of hope is that the two sides will come together in the wake of this tragedy, but we've seen too often in the real world that it doesn't last.

Wow, sorry to be such a downer. West Side Story is a heavy and tragic story, and this production forces us to look at the ugliness not just in our past but in our present. But it's presented in a beautiful, striking way. I'm such a fan of Jerome Robbins' original iconic choreography, but I didn't miss it at all. Maija Garcia has created something so fresh, new, immediate, and urgent, but it still fits beautifully with the music and story. This new choreography doesn't detract or distract from the original story, it just brings it a few decades forward into the present. I learned in the post-show discussion (because I know nothing about dance) that the Jets and Sharks have very different styles, the former more loose and gangly, incorporating NYC dances, the latter based in Latin and African dance, giving each group a distinct look and feel. I've never been a big fan of dream ballets, but the choice to have the actors playing Tony and Maria dance in the "Somewhere" dream sequence lessens the disconnect, and turned that section into one of my favorites of the show. We see the group literally building a place for Tony and Maria to be together, and then tearing it apart. It's heart-breaking.

The thrust stage is sparsely decorated, allowing plenty of room for movement. Besides Lady Liberty the other dominating set pieces are rotating metal scaffolding representing Maria's balcony and Doc's store. Music Director/Conductor Mark Hartman and his fantastic 15-person orchestra are visible at the back of the stage, and do credit to this gorgeous score. The lighting design creates many memorable images with shadows, and the '50s period costumes are yummy. They help to distinguish the Jets (cool shades of blue, green, and gray) from the Sharks (warm reds, oranges, and yellows). Because of the diverse casting, you can't always tell who belongs to which gang just by looking at them, which is a good reminder that we can't know who a person is or what their background is just by their appearance. (Scenic design by Christopher Acebo, costume design by Jen Caprio, lighting design by Bradley King.)

This cast is absolutely dreamy, and includes some of my #TCTheater faves along with national talent. I don't have the time or space to name each and every fabulous member of this huge cast; so much is going on that I'm glad I already have tickets to see the show again with my family. You could see the show many times, focusing on a different member of the cast each time, and be thoroughly and differently entertained each time. First and foremost, this is a Tony and Maria to believe in - Marc Koeck with all his square-jawed broad-shouldered gorgeous-voiced appeal, and Mia Pinero sharing her sweet and earnest soul with a soaring soprano. Other highlights include Darius Jordan Lee's smooth cool Riff, Marco Antonio Santiago's elegant Bernardo, understudy Kristin Yancy stepping into the role of Anita with confidence and spirit before the first understudy rehearsal, Raye Birk's world-weary Doc, and Terry Hempleman at his most fierce and despicable as Shrank. And really each ensemble member creates such a specific, interesting, and endlessly watchable character, and they all work together so well as a cohesive group.

The Guthrie's West Side Story is a stunning production that makes me see one of my favorite musicals in a whole new light. It's not just a sweet story about the courage of love in the face of hate, and a quaint examination of the prejudices of our past. When it premiered on Broadway in 1957 it reflected the violence on the streets at the time, and the updates made in this production help us to see it as a reflection of the violence and prejudice of our world today, which if anything, feels like it's only gotten worse. It makes one want to shake one's head like Doc and ask, what will it take to get through to you? To all of us?

West Side Story continues on the Guthrie's thrust stage through August 26.


*You can see the inspiration for West Side Story, Shakespeare's Romeo and Juliet, outdoors at area parks through July 15 in Classical Actors Ensemble's playful yet tragic production.