"The Minotaur Or: Amelia Earhart is Alive and Traveling Through the Underworld" by Sheep Theater at In the Heart of the Beast Theatre 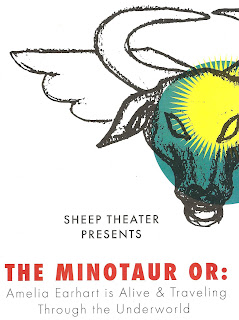 The history and legend of Amelia Earhart and Greek mythology seems like an odd mix. In other words, perfect for Sheep Theater, a company that promises "original plays with an emphasis on classically epic stories that highlight the deranged confidence of humanity with sincerity and honesty." Like much of their work, The Minotaur Or: Amelia Earhart is Alive and Traveling Through the Underworld is a fun mish-mash of history, legend, and myth with an awkwardly long title. With a lot of ingenuity, heart, and silliness, the troupe proposes one possible fate for the long missing pioneering aviator, and makes the Underworld look like a pretty fun place to hang out.


Sheep is performing at In the Heart of the Beast Puppet and Mask Theatre in the Phillips neighborhood of Minneapolis. They make great use of the space, which has lots of odd nooks and crannies for performance. The show starts in an unconventional way as the audience is led into the theater and onto the stage, where we meet Amelia (Iris Rose Page), her navigator Snook (Madeleine Rowe), and their downed plane, cleverly represented by ladders (which are used throughout the show as various things including boats). Soon we enter the Underworld along with Amelia and Snook, in search of a way home. Along the way they meet several creatures from Greek mythology: the kind of dopey god Poseidon (Joey Hamburger); the cool ruler of the Underworld in white linen Hades (Michael Rogers); the devious judge of the Underworld Minos (Robb Goetzke); the friendly Icarus (Tara Luccino); and the magnificent and misunderstood creature known as the Minotaur (Trevor Simmons). As with such stories, there are various tasks our heros need to accomplish to get to their goal, and difficult choices they need to make. In the end it's a story of friendship, particularly female friendship, and exploration.

The funny, clever, silly, smart script was written by company members Joey Hamburger and Iris Rose Page along with frequent collaborator Michael Rogers, and directed by company member Michael Torsch with just the right tone of "deranged sincerity." The cast (which also includes Jacob Mobley, Madhu Bangalore, Meg Bradley, and Tom Schultz) fully commits to this tone and works well as an ensemble. The simple sets and props are delightfully makeshift (I particularly love the wings that Icarus' dad makes), and the live music (by John Hilsen) helps create the ambiance of the Underworld (although at times it was just a tad too loud, making the dialogue difficult to hear).

Sheep Theater can always be relied upon to put up a really fun show that's clever and creative and always original. Check them out at HOBT through June 23 (click here for tickets, $12-20) and/or at the Fringe this August.