"Fellow Travelers" by Minnesota Opera at the Cowles Center 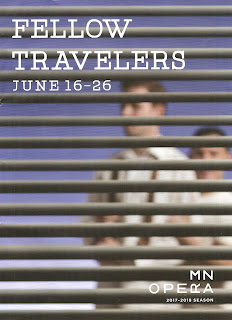 I'm not much of an opera-goer, mostly because there's so much theater to see, and also because I have a hard time connecting to a story that's sung in a language I don't understand. I like my opera in English, modern (or modernized), and in a small(er) house (see also Skylark Opera). Minnesota Opera's final production in their 2017-2018 checks all of those boxes, plus it's directed by my favorite director of music-theater, Peter Rothstein. So I made a spontaneous trip to the opera yesterday (performed in the Cowles Center Goodale Theater) to see Fellow Travelers, commissioned by the Cincinnati Opera in 2016. Based on the novel of the same name by Thomas Mallon, Fellow Travelers tells the story of two men who fall in love in 1950s Washington, D.C., during the Lavender Scare, something I was not previously aware of (bonus: educational!). It's an exceedingly beautiful piece - a heart-breakingly tragic love story, an examination of a dark period in our history, and commentary on the world today, all told with gorgeous music that heightens the emotions of the story. I'm rethinking my position on opera.

The Lavender Scare, as I learned yesterday, refers to a government policy of firing homosexuals who worked in the State Department. It coincided with the rise of McCarthyism and resulted in over 5000 gays and lesbians losing their jobs. Fellow Travelers tells the fictional story of two victims of this very real historical injustice. Young reporter Timothy Laughlin (the wonderfully empathetic Andres Acosta) has a meet-cute in the park with the older, more experienced, Don Draper-esque (or perhaps more appropriately, Sal) State Department employee Hawkins Fuller (the charismatic Hadleigh Adams). Hawk is a bit of a playboy, and his secretary Mary (the lovely Adriana Zabala) tries to warn Tim. But there's a real love between these two men, a love that the era and McCarthy's witch hunt will not let exist. And that's the tragedy of the past. The tragedy of the present and what makes this piece so relevant, is that the State Department apologized for the Lavender Scare in January of 2017. And then on January 20, the apology was rescinded.

As I've said I don't know much about opera, so I don't know how to write about it (I barely know how to write about theater). But I absolutely loved the score, gorgeously sung by the talented and diverse cast and gloriously played by the 17-piece pit orchestra conducted by Daniela Candillari (one of my favorite things about opera - the conductor joins the curtain call to take a well deserved bow). The music (by Gregory Spears, with libretto by Greg Pierce) is so beautiful and conveys so many emotions that mere words cannot. It's so filled with longing and sadness and joy and hope all mixed up together that it might make your heart hurt. And there are dramatic moments as well, such as the interrogation scene.

The story is beautifully staged with lighting effects creating shadows and moods, with a theme of lights shining through blinds, hiding from the outside world. The set is simple but stunning, with a backdrop of columns, and a few sparse set pieces rolled on stage as needed. The 1950s era is brought to life by the smart, crisp, classic period costumes. (Lighting design by Mary Shabatura, scenic and properties design by Sara Brown, and costume design by Trevor Bowen.)


Fellow Travelers is musically and thematically gorgeous, beautifully acted, sung, directed, staged, and designed, with an important and relevant theme. One that can be summarized by Andrew Garfield's recent Tony speech (for best actor in a play that also references Ray Cohn, as this piece does): "let's just bake a cake for everyone who wants a cake to be baked." After all, we're all fellow travelers on this planet, and we all deserve to have love. And cake.

Fellow Travelers continues through this weekend only. Click here for info and tickets.

*I'm currently re-watching Mad Men, the highest form of the art we call television. I apologize for all of the Mad Men references that will no doubt appear in many blog posts this summer.