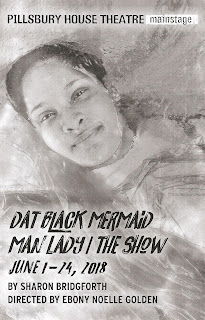 "This is why we're here." The final refrain of Pillsbury House Theatre stirring production of Dat Black Mermaid Man Lady / The Show, which one could call a play-musical-poetry-storytelling-dance-concert, is still ringing in my ears. It's a piece that defies explanation, that maybe shouldn't be explained, but rather experienced. In just about an hour we're taken on a journey into the past, into the Southern African American culture, into stories with various archetypal characters that come alive through the voices of the ensemble. Pillsbury House consistently produces new, relevant, innovative, thoughtful work, and this show is another example of that.

The show begins in Pillsbury House's cozy and welcoming lobby, where audience members are invited to write a note of love to their ancestors. At show time, a procession of the ensemble begins on the balcony and travels downstairs to the altar where we've left our notes, to which the ensemble adds additional tokens of memory. We're then led into the theater space, with streamers hanging from the ceiling and onstage seating making it a communal affair (don't worry, it's immersive but not interactive). Then the storytelling begins with ensemble members Aimee K. Bryant, Florinda Bryant, Kenyai O'Neal, and PaviElle French taking turns singing, telling stories, and inhabiting the colorful, eclectic, specifically drawn characters (including the title character, who weaves in and out of the narrative). I'm not sure what it was about, or what happens, but it's an engaging journey.

Since one of the actors twisted her ankle in a preview performance, much of the performance I saw was seated, but I'm told at future performances there will be movement and dancing. There was still a little chair dancing, and what the performance lacked in movement it more than made up for in music. The songs flow in and out of the stories seamlessly, with rhythm and melodies and gorgeous harmonies combining to create a truly moving soundscape

Playwright Sharon Bridgforth, director Ebony Noelle Golden, and the ensemble have treating something truly unique. Go and get the full experience this weekend through June 24, an experience that's engaging, intimate, creative, poetic, and beautiful.