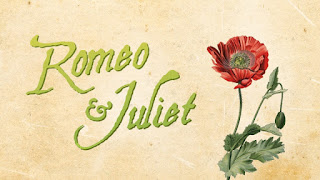 The best thing about summer in Minnesota is outdoor theater. And the lakes, of course. But I love nothing more on a lovely summer evening than to sit outside in a park or a garden somewhere while someone tells me a story. Classical Actors Ensemble continues their tradition of bringing Shakespeare to metro area parks (for free!) with Romeo and Juliet, playing at Lake of the Isles and many other parks every Thursday through Sunday through mid July. Previously I've seen CAE do Shakespeare's comedies, and found them to be so fun, playful, and almost interactive, the way Shakespeare was meant to be. This is the first time I've seen them do a tragedy for their fun summer outdoor play. But Romeo and Juliet is pretty much a rom-com, until somebody dies, so it's still fun and playful in the beginning. And while maybe the tragedy doesn't have quite the same effect when the sun is softly setting, the birds are chirping, and the wind is blowing through the leaves on the trees, it's still the best way to see Shakespeare. Click here to see all of the locations along with handy maps, and then just show up - no tickets or reservations needed (but donations happily accepted to keep this wonderfully free and accessible experience going).

I've seen Romeo and Juliet so many times that I could almost recite some of the lines with the actors. I keep hoping that someday the Friar's stupid message will get through to Romeo, preventing the senseless tragedy of these young lovers' deaths, but I guess that's sort of the point of the piece. The foolishness of young love, but really the strength and beauty of love in the middle of so much hate and violence. Director Joseph Papke plays up the comedy in the early scenes, with Romeo's rambunctious friends, and Juliet's chatty and sometimes inappropriate nurse. Which just makes the inescapable tragedy of their story even more heart-breaking. The action is accompanied by music in a sort of '60s as played at Renn Fest style, and the cast wanders amongst and through the audience, which makes the storytelling immediate, accessible, and engaging.

How do they do the balcony scene outside in a different location every night? That was my question too. Simply and cleverly, as it turns out. The balcony, bed, and a few other set pieces are large blocks of what looks like stone, but likely are not since they're easily carried on and off the "stage." So Juliet is only standing on a block a few feet high, it works, and our imaginations do the rest. Costumes are again a sort of Renn Fest style, people running around in bare feet, skirts dragging in the dirt, hair blowing in the wind, skin sunburned from doing theater in the open air (costume design by Lolly Foy, scenic design by Dietrich Poppen). Ah, the joys of summer!

Since this is Romeo and Juliet, we get both dancing (choreographed by Eli Sibley) and fighting (choreographed by David P. Schneider), both of which are entertaining to watch. Sitting on a green lawn watching a sword fight really is one of #TCTheater's best summer pleasures.

Everyone in the huge cast is really fun to watch, natural and playful. Mike Tober and Emma VanVactor-Lee are so adorable and charming as the young lovers. Other highlights in the cast include Alan Tilson as the dependable Friar, Jacob Hooper as a hapless servant, Jake Sung-Guk Sullivan as the noble Tybalt, Leif Jurgensen and Siri Hellerman as Juliet's parents, Samantha V. Papke as the nurse, and Tom Conry and Tyler Stamm as Romeo's pals Benvolio and the madcap Mercutio. 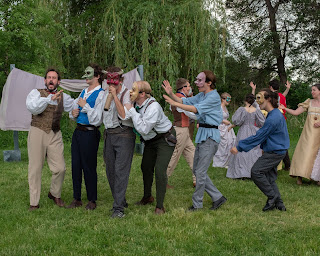 Don't miss your chance to see free Shakespeare in the park this summer, likely playing at a location near you. It's where Minnesota's equally amazing arts and nature scenes intersect. More information about Classical Actors Ensemble, Shakespeare in the park, and other programs and performances can be found here.