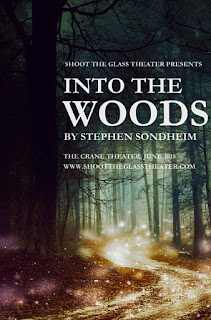 I've seen Into the Woods twice in the last six weeks, and six times in the last seven years (not counting the recent movie adaptation). And while I would love #TCTheater to diversify its choice of shows (there are quite a few duplicates and triplicates this season), I'm not going to complain about this one. Every time I see Stephen Sondheim and James Lapine's exceedingly clever fairy tale mash-up that explores what happens after the "happily ever after," I love it even more. It's instantly familiar due to the fairy tale characters we grew up with, but then it lures you into a darker story. And it's a versatile piece that works just as well set in the forests of Asia as in a German beer garden. For their production, newish theater company Shoot the Glass Theater has gone with a stripped down, bare bones, unmiked approach that works beautifully. With minimal (but charming) set pieces and simple costumes, they're able to focus on the storytelling and the music, which is what it's all about.

The first act of Into the Woods is a fairly conventional retelling of some common fairy tales, all mashed together (Little Red Riding Hood, Jack and the Beanstalk, Cinderella, Rapunzel, etc.), with our heroes accomplishing their tasks and reaching their goals. It could end right there in a "happily ever after" (and that's exactly what my cousin's high school production did). But this is Sondheim, so it's not that simple. Everyone seems happy, but as Betty Draper* asks after she's won her handsome husband, two children, and house in the suburbs: then what? As Glinda the good witch says, "getting your dreams, it's strange, but it seems, a little - well - complicated." Act II shows us the consequences of the actions of Act I, with our heroes dealing with the choices that they made. It's really a story about good vs. evil, fantasy vs. reality, what we think we want in life vs. what we actually get, and the realization that things aren't always what they seem. "Witches can be right, giants can be good, you decide what's right, you decide what's good."

Into the Woods includes a narrator character, who provides some exposition and explanation as an outside observer, until he unwillingly becomes part of the story. This production utilizes him more as a storyteller (played by Nick Menzhuber), with the help of two storytelling aides (played by Maggie Behnam and Ellie Herringshaw). The three convene onstage before the show begins, as if they're preparing for telling us the story, and the two aides functions as stagehands and puppeteers (the birds!) throughout, sometimes directed by the storyteller if they get too involved. It's a cute and clever interpretation.

This cast truly is a who's who of young talent in #TCTheater (although disappointingly lacking in diversity). Under the direction of Artistic Director Ryan Nielson and music direction of Randy Buikema and Jean Van Heel (who leads the five-person onstage band on piano), the entire 19-person cast plays their roles well and sings like a dream, individually and collectively, with not a weak link among them. The performance space at Crane stage seems big, until you get a huge cast like this on it, although they're well-organized so it never feels crowded. But the best thing about the intimate space is that it does not require miking of performers, so the sound is pure and unencumbered and gorgeous.

Highlights in the cast include, well, everyone. Kyler Chase and Kaitlin Klemencic make a wonderful team as the baker and his wife, the very human heart and soul of this story. Becca Hart (who I'm more and more convinced is going to be a star, although some would argue she already is) gives a lovely interpretation of Cinderella. Karissa Lade is the adorable and precocious Little Red Riding Hood, Andrew Newman is the sweet animal-loving accidental giant-killer Jack, and Caitlin Burns (so fantastic in the Aristry's recent production of Sondheim's Follies) is his slightly boozy mother. Joseph Hitchcock and Frank Moran are perfectly charming idiots as the princes (the latter also doubling as the dastardly wolf), singing one of the funniest songs, "Agony." John Goodrich may not be the strongest singer but makes up for it in charisma as (spoiler alert!) the bakers father. Adam Rousar is the unforgiving steward, Anna Maher is Rapunzel, a beautiful voice buried under a mountain of hair, and Yvonne Freese supplies the haunting voices of the giant and Cinderella's mother. Kelly Ann Danger, Jaclyn Juola, and Taylor Haggerty are the funny and not-so-ugly stepmother/sisters. Last but not least, Emily Jansen is pretty fantastic as the ugly old witch who transforms to the beautiful young (but alas, powerless) witch.

The stage is mostly bare, with hanging fabric columns representing trees. The only props are the wooden silhouette of a cow on wheels, a similarly constructed hen, and the clusters of birds hanging on sticks. Rather than extravagant period costumes, the cast is dressed in a sort of modern fairy tale chic style, with storytellers dressed in simple modern clothing (costumes designed by Rachel Nielson). The classic and simple aesthetic is pleasing and doesn't overwhelm the story. As they say, sometimes less is more.

Go Into the Woods with this delightful production and talented cast at the Crane Theater in Northeast Minneapolis, Thursdays through Sundays (more info and tickets here, with discount tickets available on Goldstar).


*I'm currently re-watching Mad Men, the highest form of the art we call television. I apologize for all of the Mad Men references that will no doubt appear in many blog posts this summer.