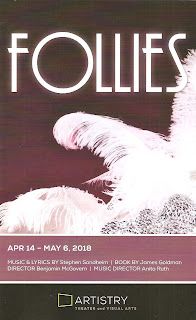 Artistry's production of Stephen Sondheim's 1971 musical Follies, the final show of their 2017-2018 season, opened two weeks ago, but the Great April Blizzard of '18 caused them to cancel several shows on their opening weekend. I finally had the opportunity to see it this weekend, and it was worth the wait! Having seen the 2011 Broadway revival, I knew what a gorgeous, but complicated, musical Follies is (does Sondheim write any other kind?). During my two-week delay in seeing the show I've been listening to the 2011 recording, so I was primed and ready for this show, and I loved every minute of it. Music Director Anita Ruth's 21-piece pit orchestra, Director Benjamin McGovern's large and talented cast (which includes three Equity actors, perhaps the most I've seen in a single show at Artistry), plus the dazzling design do justice to Sondheim and book writer James Goldman's complicated and beautiful musical. Congratulations to Artistry for tackling tricky Sondheim and pulling it off beautifully!

Set in 1971, Follies takes place in a theater about to be demolished and reunites the women who worked there in the 30s and 40s as "Follies girls." The main characters are two erstwhile best friends, Sally and Phyllis, and their husbands Buddy and Ben. They comprise an awkward and complicated love quadrangle, both then and now. Buddy loves Sally but Sally loves Ben. Ben only loves Sally until he has her, and then he wants Phyllis back. As they reminisce about their past and their stories unfold, we also see the young versions of these four characters, like visions from the past.  Sometimes the past and present action occur simultaneously. The worlds overlap and we see the parallels between then and now.* Shortly into Act II we leave the dual realities of the past and the present and enter into the world of the follies, which is kind of weird as these campy showy numbers overtake the story, but also kind of brilliant as Sondheim uses the form of the follies to further explore the characters.

One of the great things about Sondheim is that he writes for the entire ensemble, not just a few leads, and that's perhaps never more true than in Follies, which includes roles for many women over 40, each of whom gets a showstopper number. What's not to love about that? We have the divine Melissa Hart, a true "Broadway Baby," singing that number informed by all of the experiences of her past; Gail Ottmar reminiscing about "Ah, Paris;" T.J. Mayrand leading the cast in a tap number (women over 40 tap-dancing?! how wonderful!); Diana Wilde belting out one of the most well known songs, "I'm Still Here;" and accomplished soprano Jean del Santo singing the lovely and wistful "One More Kiss," a duet with Sarah DeYoung as the younger version of her character that's a musical highlight of the show.

Artistry has done a great job in casting the past versions of the characters, with each
pair having a similar look and sound, and more importantly feel like they could be the same character. Especially with the four (eight) leads, who are all wonderful, and pair some of our beloved #TCTheater veterans with fresh-faced young talent. As the present version of the two couples, Caitlin Burns is all girlish delight and enthusiasm as Sally, Wendy Short-Hays is perfectly cast as the world-weary Phyllis, Paul R. Coate has all of the boyish good-natured charm of Buddy, and Bradley Greenwald epitomizes the cold and elegant Ben, and that voice! In fact they all sound wonderful and each has a moment (or three) to shine, including Caitlin's heart-wrenching "Losing My Mind," Wendy kicking it up with a bunch of boys in "The Story of Lucy and Jessie," Paul R. Coate's fast-paced and funny "Buddy's Blues," and Bradley's gorgeous voice soaring through "Too Many Mornings." The younger versions of this quartet (Rebekah Meyer, Michaela Shapiro,  Riley Parham, and Christian B. LaBissioniere) are all bright young talents I look forward to seeing more of on #TCTheater stages.

The story takes place on the stage of an old theater, represented by a mostly empty stage with movable metal stairs and scaffolding, with old plastic sheeting hanging from them. But then the stage has to transform to its former glory in the follies section of the show, acheived by a grand staircase and lush curtains (scenic design by Eli Sherlock). Ed Gleeman's gorgeous period costume design begins with the the ghosts of three follies girls that haunt the entire show, dressed in stunning showgirl costumes, complete with high headdresses and lots of feathers. The present and past streetwair looks of the many characters contrast with the showy fantasy follies wardrobe. Ballet of the Dolls' founder Myron Johnson (see also Nutcracker (not so) Suite) has choreographed the classic and varied dance numbers, all of which are enjoyable to watch.

Follies is a wistful show full of nostalgia, longing, and regret, with the characters searching for something they had back then, but have since lost. Ultimately they learn that you can't return to the past, you can't change the choices you made, you have to live in the present with the results of those choices. I'm thrilled that Artistry is bringing us this beautiful and rarely produced Sondheim musical, with a full orchestra and talented ensemble.

Follies continues through May 6. Then check out what Artistry has in store for their 2018-2019 season (I'm most excited for Victor/Victoria, which I haven't seen in 22 years since Julie Andrews started in the pre-Broadway premiere in Minneapolis!).

*Plot summary modified from what I wrote about the 2011 Broadway revival.