"The Basset Table" by Persistent Theatre Productions at Dreamland Arts 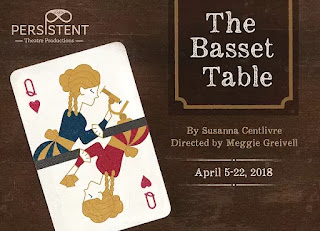 Welcome to the Renaissance! The day after seeing the hilarious fictional farce about (all male) playwrights in Shakespeare's day, I saw an actual play written by a female playwright of the era. Who knew that there was a successful female playwright who lived and wrote shortly after Shakespeare's time? I didn't. Susanna Centlivre was one of the first women in history to make a living as a playwright, and was also an actor in the era just after women were allowed on stage in England. With the current necessary focus on putting more women's stories on stage, it's a great idea to revisit female playwrights of the past who have been largely forgotten. Thanks to Persistent Theatre Productions, a new #TCTheater company with a "feminist voice," for bringing us one of Centlivre's works.

The Basset Table was written in 1701 and features several independent women, one of whom runs a card game where serious money is won or lost. Lady Reveller (Julie Ann Grief) lives with her uncle Sir Richard (Don Larsson), who is not too pleased with his niece's gambling habit and wishes her to be more like her cousins, the demure Lucy (Alison Anderson) and the scientist Valeria (Lana Bean). He wishes to marry off his daughters and urges Lady Reveller to do the same. Of course that's exactly what happens in the end. But while the play still ends with everyone coupled up (like Shakespeare's comedies usually do), at least the getting there is perhaps a little less cliched and the women don't have to give up their interests, or hopefully their independence.

Before the show starts, in the sweet little space that is Dreamland Arts in on Hamline Ave. in St. Paul, the actors mill around in character, chatting with the audience. This playful spirit continues into the play itself, in which familiar troupes like silly/wise servants (including an amusingly over the top Allison True) and disguises make for some ridiculous comedy. The cast really commits to the campy tone under director Meggie Grievell, with some more poignant moments as well. The British accents are fun to listen to, if a bit inconsistent.

A cast of 12 is large for this intimate space, that only seats about 40 or so. But they're rarely all on stage together, and the stage is separated into several distinct areas on different levels (living space, basset table, science lab), so that it never feels crowded. The period costumes are bright and colorful, complete with headpieces. (Set and propery design by Beth Anne Roe, costume design by Rebecca Karstad.)

The Basset Table is a similar feel to Shakespeare's comedies, but it's fun to get it from a women's perspective (and not as long - just over two hours including intermission). Continuing through April 22.