"The Imaginary Invalid" by Combustible Company at Gremlin Theatre 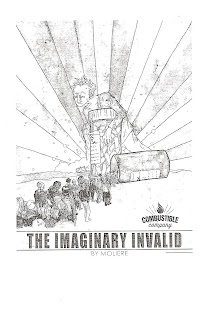 Their opening night was cancelled in the Great April Blizzard of '18, but a little (or a lot) of snow didn't stop Combustible Company from delivering a funny, clever, relevant, and really well-done version of Moliere's The Imaginary Invalid. When I finally made it to Gremlin Theatre two days later than planned, I found myself thoroughly entertained for two and a half hours by this delightfully odd mixture of humor, music, social commentary, bright costumes, and pharmaceutical ads. The play may be over 300 years old, but this clever new adaptation (by Oded Gross and Tracy Young) brings out all the relevance to 2018 in this story of a hypochondriac struggling with health care issues, as so many are today. The modern references make the play feel fresh and current, while still keeping a tie to the original, and the consistently fantastic cast plays up the comedy to a hilt, without losing sight of the humanity of the characters. (Playing through April 28, click here for info and tickets.)

Walking into the lobby of Gremlin Theatre in the Vandalia Towers building in St. Paul, I knew I was in for a unique experience thanks to the Operation game set up in the corner, people in lab coats and neon wigs, and ads for medications, health insurance, and other health care items playing on a TV screen. Continuing on into the performance space, more ads are playing on two TV screens in a wall of whitewashed doors and windows with opaque glass in them. Shortly before showtime the title character (played by co-Artistic Director Erik Hoover) wheels out and starts going through medications and bills, furiously punching numbers into a calculator with a running tape, and occasionally pausing to watch the ads. An ad for a drug called Livwellium comes on, complete with a perky theme song, and soon the ad comes to life as the ensemble enters the performance space singing and dancing with umbrellas. This opening number sets the stage well for wacky fun to come.

The invalid's name is Argan, and he's obsessed with his health (or lack thereof, as he perceives it). Consumed with doctors and treatments, he's also trying to make a good match for his daughters Louison and Angelique, and arranges for the latter to be married to a soon-to-be doctor, thinking with all of his ailments it would be a good idea to have a doctor in the family. But of course Angelique has recently fallen in love with young and handsome Cleante, whom she hopes to marry instead. Argan is also dealing with his new wife Beline, who unbeknownst to him is solely after his money. Finally we have Argan's "servant" Toinette, dressed in scrubs, who looks after him and the family and brings in her brother Guy for a job, telling everyone he's deaf and mute to protect him from saying something stupid. If that isn't a golden recipe for a farce, I don't know what is!

And a farce this is, with many hijinks occurring as Argan tries to get his life and health in order, Beline tries to get his money, the daughters try to be happy, and Toinette tries to prove them all wrong. There's truly not a weak link in the diverse and talented 13-person cast. As directed by co-Artistic Director Kym Longhi, the campily comedic tone is consistent across the board, with much physical comedy, and even a touch of poignancy thrown in since we are dealing with serious issues of health here. Everyone in the cast is truly a delight to watch, including Anna Pladson and Joni Griffith as Argan's daughters; Ashawnti Sakina Ford and Daniel Sakamoto-Wengel as the smart servants Toinette and Guy (speaking occasional sign language to keep up the ruse of Guy's deafness and muteness, and because their parents are deaf); Antonio Duke as Argan's brother, his opposite in every way; Julianna Drajko as Argan's delightfully mischievous wife (and his beloved first wife in a flashback); Jonathan Beller as the scheming laywer; Ricky Morisseau as Angelique's charming love interest; and Isaac Bont and Jonathan Saliger in hilarious dual roles.

I'm not quite sure where this production falls on the music-theater spectrum, I'm not sure I'd call it a musical, but characters do occasionally sing dialogue in character, so it's more than a play with music. Whatever you all it, music and dance are well-used in the storytelling. The songs are cheesy and most are reminiscent of some familiar song I can't quite place, but that fits with the campy nature of the farce. Songs that are profound and brilliant wouldn't really fit here. The cast sings along to a recorded track, which normally I don't like, but again it fits with the feel of the piece. The closing number is the RENTian "All We Have is Now" (aka "No Day But Today"), and is a really sweet way to end the show that grounds the farce in something a little more real.

Like everything in the show, the design of the show is well thought out, with video design meshing with the aforementioned wall of doors that open to reveal props. And the bright, colorful, almost cartoonish costumes really pop and fit with the fun farcical tone of the show (costume design by Renee Hatton, set design by Paul Herwig, prop design by Kym Longhi, video design by Jim Peitzman).

This is only the third piece from Combustible Company, but it's enough for me to know not to miss a rare chance to see their work. They only come along every couple of years, but it's worth the wait, and it's obvious how much thought and detail is put into every show that they do. The Imaginary Invalid continues through April 28; highly recommended for a fun, farcical, enjoyable comedy that's classic yet modern and timely.