"This Bitter Earth" at Penumbra Theatre 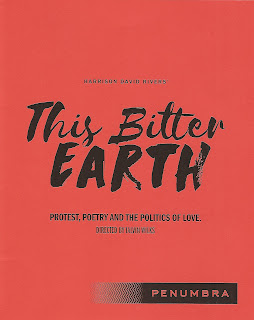 Playwright Harrison David Rivers is having a moment here in #TCTheater. This spring he's had two world premieres (History Theatre's A Crack in the Sky and Theater Latte Da's Five Points, with music and lyrics by Ethan D. Pakchar and Douglas Lyons), and his play the bandaged place was the final reading in the Playwrights' Center's (where he's a core writer) Ruth Easton series earlier this month. And now, the jewel in the crown of Harrison David Rivers' 2018 #TCTheater productions is Penumbra Theatre's regional premiere of This Bitter Earth (which premiered at San Francisco's New Conservatory Theatre Center last fall). This brilliant play artfully combines the political (referencing several of the killings of young black man in recent years, interracial relationships, and gay rights) with the personal (an achingly beautiful love story). The talented two-person cast and creative team have created a visually and emotionally stunning production that engages the mind, the conscience, and the heart.

This Bitter Earth is the story of Jesse, a young black playwright, and Neil, a white activist and trust fund baby. The story is told in a non-linear fashion, with scenes jumping around in time and place over a several year period from 2012-2015. But it's never confusing, even for this linear-minded person, because the date and location is displayed before each scene, and the clear direction and spot-on acting immediately put us in the proper space and time. Jesse and Neil meet and fall in love in NYC, eventually moving to St. Paul for Jesse's theater and teaching career. Neil travels around the country as part of the Black Lives Matter movement; he goes to Ferguson after Michael Brown is shot, he's in Baltimore for the protests after Freddie Gray is killed, and too many more. He feels helpless, and is very aware of his privilege, and wants to do something to help. He's also afraid for the safety of his black boyfriend, but Jesse prefers to focus on his work and his art rather than get involved. This causes conflict in their relationship, but despite the bumps along the way, they're a loving and supportive couple. Until the devastating ending which, because of the time jumps, is seen three times throughout the play. Knowing it's coming doesn't make the final conclusion any easier to bear.

The entire play takes place in the bedroom of Jesse and Neil's apartment (whether in NYC or St. Paul), a chic and lived in room with adornments that tell us who they are. The outside world is brought in through projections that create some really lovely, and sometimes brutal, effects. At times the entire stage is flooded with words, or an abstract design, or actual footage of real-life protests. The sounds of protests, or a club, or thoughtfully chosen songs also help to define the place and tone of each scene (scenic design by Maruti Evans, projection design by Kathy Maxwell, sound design by Kevin Springer).

As Jesse and Neil, newcomers to the Penumbra stage (but not to #TCTheater) Jon-Michael Reese and Kevin Fanshaw create a believable and empathetic couple. They're both so raw and real as these very human, flawed, beautiful people. It really does feel like eavesdropping on a series of intimate conversations. Director Talvin Wilks has a sure hand in navigating the many shifts in time, place, and tone.

Everything that Guess Who’s Coming to Dinner (now playing at the Guthrie) wants to be is what This Bitter Earth is. A modern, nuanced, complex portrait of an interracial relationship, the politics of the world in which it lives, and the love that transcends racial and class divides. Except maybe it can't always because it still has to exist in this broken world. The play is brilliantly constructed the way it seamlessly blends art, politics, and relationships, and at times the dialogue feels like poetry. I left the theater feeling absolutely devastated, but also incredibly moved. This is the kind of theater that the world needs right now, theater that looks at the issues of the world square in the face and offers a road to healing.

This Bitter Earth continues at Penumbra Theatre through May 20. Don't miss it! (More info and tickets here.)