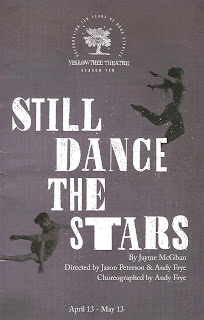 Last night in the cozy intimate space of Yellow Tree Theatre, in a strip mall in Osseo, I saw a world premiere new play that's unlike anything I've seen before. As someone who sees a lot of theater (and I mean a lot), that's a rare occurrence. While playwright Jayme McGhan's Still Dance the Stars reminds me a little of the Pulitzer Prize winning musical Next to Normal, in that it deals with parents grieving the loss of a child in different (and sometimes hallucinatory) ways, the storytelling is completely unique, combining very real and natural dialogue, fantastical dream sequences in which stuffed animals come to life, dance, and music to tell a heart-wrenching and heart-warming story of grief, love, and family. It's a great choice of play for Yellow Tree, my favorite theater in the 'burbs, and the cast and creative team do a beautiful job of bringing the play to life with all of its humor, grace, silliness, and beauty.

Anne and James are a typical young married couple, who also run a dance studio together. Typical except for the fact that James' dancing proposal went viral, sending the couple into mild celebrity status. We meet them six years after the famous event, when a reporter does a catch-up interview with them. But a lot has happened to Anne and James in the five years they've been married, and not all good. They've lost a child, the details of which are slowly spelled out throughout the play, and are on the brink of divorce. The two have one last whiskey-fueled night together before the interview and subsequent break-up, as James packs up all of the stuffed animals he's won at carnivals (it's their thing). Their conversation takes the form of imaging the animals come to life, as people in their lives (her sister and mother, his father, their daughter Hope, the reporter). I know this sounds weird and not a little crazy, but somehow it works, and the story flows seamlessly from reality to this dream-state and back, with much credit to the directors Jason Peterson and Andy Frye, the latter of whom also choreographed the dance sequences. Because, oh yes, the stuffed animals who come to life as friends and family also dance. And have dance-offs as they try to help or hinder Hope in her search for a home she never knew. But of course all of this is really happening in Anne and James' minds and conversation, as they work through their grief and other issues in their relationship.

Yellow Tree has assembled a wonderful nine-person cast of familiar faces and newcomers to the YTT stage. Vanessa Wasche and Zachary Stofer are both so real, raw, and empathetic as the grieving couple, as they break your heart one minute and make you laugh the next. Mary Fox is her usual spirited and hilarious self as Anne's sister; Peter Colburn gives a heartfelt portrayal of James' loving but stoic father; Janet Hanson is a delight as the sisters' full-of-life (and married to a much younger man) pastor mom; Louisa Darr is a sweet and natural Hope (the hippo); Corey Mills is surprisingly nimble as the adorkable camera operator; Abby Magalee says little but is a fantastic dancer and DJ; and last but not least, Emily Madigan (the reporter and villain of the dream world) is a fierce dancer with, I'm just going to say it, the best hair that can currently be seen on #TCTheater stages. And she works every perfect curl. #hairography #hairenvy #curlygirl

The design of the show all works together to create this imaginative yet grounded world. The play takes place in the dance studio and the dream world, and the set (designed by Katie Phillips) is simple and basic to serve as a backdrop. It's dominated by a huge multi-colored paneled wall, with some of the panels lighting up. This and the other lighting effects (designed by Courtney Schmitz) help to differentiate between dream and reality. The living stuffed animal costumes are playful and fun and match so closely to their stuffed animal counterparts that they must have been made together. They're not full stuffed animal costumes, rather a few specific pieces that can be easily thrown over each character's real-life costume (costume design by Samantha Haddow).

Still Dance the Stars is one of those plays that will make you laugh and cry, which is my favorite kind of play. And the dancing is appropriate to the heightened emotion of the situation and really furthers the storytelling. It feels totally appropriate to each character's story, and is really fun to watch too (with original music by Matt Riehle). You still have a few weeks (through May 13) to catch this beautiful, sad, sweet, moving new play, but it's selling well so don't delay. Watch the below video, then click here to order tickets (YTT has some of the most reasonable ticket prices in town, with all seats under $30).