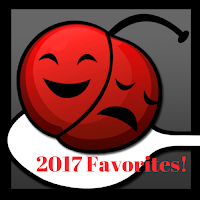 Well here we are again friends, the end of another excellent year of #TCTheater. 2017 marks the first year that I didn't increase my theater intake from the previous year (perhaps I've reached the saturation point of how much theater one mortal can see in a year). I saw the same number of shows this year as last year - about 200 plus about 50 Fringe shows (you can read my favorites of those here), not counting my two Chicago theater trips (to see Hamilton twice) and my fabulous week in NYC (Hello Dolly! Dear Evan Hanson! Come From Away!). My 200 #TCTheater shows were distributed in approximately a 1:2 ratio of 70-ish musicals to 130-ish plays, so I thought I'd share my top 10% of each in each category, along with a few other noteworthy trends of the year. Know that I could easily have added another 20 shows that I loved to these lists, because there is so much brilliant theater being made in St. Paul and Minneapolis. But these are the shows I loved so much I wanted to see them again (and in a few cases I did). They're listed in alphabetical order, with a quote from my original review that explains why it made the list (click on the title to read the original post).

In re-reading my original thoughts on these shows and choosing a representative quote for each, it really feels like this is a great summary of the year that was 2017, for better or worse. Some of my choices are "just" entertainment, but many of them have to do with issues that were very much in the forefront of our culture this year: immigration, racism, refugees, divisiveness, feminism. On the latter topic, while 2017 was in many ways a difficult one for women, in other ways it was a great year for women, from the Women's Marches across the world in January, to the #MeToo movement that saw many women telling their long untold truths. This was evident in the #TCTheater scene as well, with what felt like more women's stories being told, and more women doing the telling. A trend that will hopefully continue into 2018 and beyond.

Another continuing trend is theaters getting creative with spaces. I love site-specific theater, and there were some excellent ones this year. Perhaps the most brilliant example of site-specific theater this year was Mixed Blood's fantastic ambulatory play Safe at Home, about immigration and America's favorite pastime, at the beautiful new home of the St. Paul Saints, CHS Field. Meticulously timed, the audience walked all around and through the ballpark watching separate little scenes that culminated in a powerful final scene in the cramped hallway leading from the locker room to the field. Talk about up close and personal! Some other great examples of site specific theater include: Wayward Theatre brought us not one but two plays perfectly suited to their location, Ghost Train, a co-production with Mission Theatre at the Minnesota Transportation Museum (aka a train museum!) and the Irish pub play The Weir in a pub space within Urban Growler Brewing. Skylark Opera Theatre presented an intimate Don Giovanni in several locations within the historic Women's Club, and new company Orchard Theatre Collective brought us right into Nora's living room with A Doll's House at the James J. Hill House. Last but not least, and one of my favorite theater experiences of any and every year, TigerLion Arts returned their beautiful creation Nature to the place where it began, the Minnesota Landscape Arboretum. There is no more perfect setting for this play about nature than nature itself.

2017 saw the birth of several new theater companies, including the aforementioned Orchard Theatre Collective. We also saw the exciting debut of Trademark Theater, helmed by the talented Tyler Ms, with their new inventive musical adaptation of Robin Hood. Prime Productions promises to feature work by and about women over 50 (hooray!), and the wonderful Little Wars was a great start. SOS Theater brought us a quirky, funny, poignant new play Roller Derby Queen. But perhaps my favorite, and definitely the most prolific, new company this year is Theatre Elision, filling a need we didn't even know we had, which is small cast new or rarely produced musicals mostly starring and about women. Beginning this spring with their original work Ragtime Women, about historical female composers, they announced an ambitious 6-show first season, which so far has included the haunting Goblin Market and a really cool Ghost Quartet by Dave Malloy, as well as a Jazzy Christmas that I unfortunately missed (the one downside of Theatre Elision is very short runs). Next up is the 1992 Off-Broadway musical spoof Ruthless! featuring a phenomenal all-female cast (more info here).

I often pick a favorite artist or "one to watch," and this year there's someone who fits both categories. Christian Bardin has been appearing on stages in the Twin Cities for several years, but 2017 was definitely her breakout year. In addition to playing a role typically played by a man in Four Humors' delightful The Importance of Being Earnest, she appeared in three of my favorite shows listed above, stealing scenes as a silly Celeste in Sunday in the Park with George, cracking me up and breaking my heart as the gum-smacking small town single mom in Lone Star Spirits, and the crown jewel in her incredible year, portraying a modern-day Austen heroine in the title role of Jungle's wildly successful Miss Bennet: Christmas at Pemberley. Christian is the rare artist that's equally good at comedy, drama, and musicals, and as much as she's shown us this year, I think we've only begun to see what she's capable of.

One area of my theater consumption that did increase this year is my attendance at the Playwrights' Center. Since I just "discovered" them last year, I'm sure I've never seen nine new play readings in a year before this one. From the monthly Ruth Easton series (now continuing the first Monday/Tuesday of every month through April), to the week-long Playlabs festival in the fall, to a random Tuesday afternoon when I was blown away by a new historical play by PWC Core Writer Carson Kreitzer, with music by Annie Enneking, brilliantly brought to life by a fantastic cast (including the aforementioned Christian Bardin), it was a great year to be at the Playwrights' Center (but when isn't it?). Check their Events page frequently for (usually free) public play reading opportunities.

In just the second full year of existence, the Twin Cities Theater Bloggers had a great year. Not only did we attend several blogger events at theaters around town, with the aim of increasing audience awareness, engagement, and conversation, but we also started a monthly conversation series centered on diversity, representation, and inclusion in #TCTheater. We've had some amazing guest panelists in our discussions about racism, sexism, disability, LGBTQIA, and mental health. You can listen to most of these discussions on our YouTube channel here - they're long but worth it. In 2018, we plan to continue the conversation series on the last Monday of every other month, beginning in February. Watch the TCTB Facebook page for details of topics, panelists, and location (and we would love to hear your feedback/comments/requests about the series, so send us a note!). We will also be announcing our 3rd annual TCTB Awards shortly, so stay tuned!

Perhaps my greatest achievement this year, and maybe even in my entire life, is kicking off the #TCTheater #Ham4All challenge. This summer, Lin-Manuel Miranda challenged the world to post their own version of a song from Hamilton, donate $10 to the Immigrants We Get the Job Done Coalition, and challenge someone else to do the same. I slightly changed the game by declaring that I would donate $10 for every local cast that posted a video, and by the end of the summer five local casts had put out an amazing video, some even creating clever mash-ups with their own show. Thanks to my friends at the Ordway for responding so quickly to my challenge, and for challenging other casts to really get the ball rolling. You can watch all of the videos here. You're welcome, world. 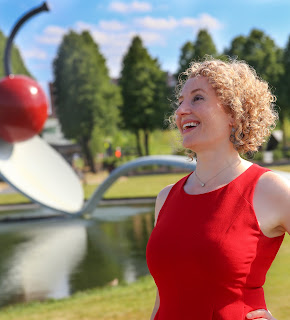 One final fun thing I did this year was have professional head shots taken for the first time ever, by my friend and fellow blogger, the lovely and talented Tracy Blowers of Soul Photography and Media, LLC. You can check out more of her work here.

That about sums up my year of #TCTheater, my 7th full year of blogging about the incredible theater community in Minneapolis/St. Paul. Thanks to everyone who has supported me in this little endeavor in any way, and a special shout-out to the press/PR people that I work with at theaters around town who provide me with press comps and share my writing. Nothing brings me as much joy as experiencing theater in this town and sharing my experiences through Cherry and Spoon. See you at the theater!