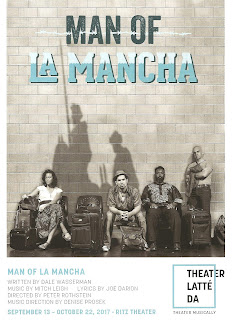 Theater Latte Da (which I would say were my favorite theater company, if I as an impartial theater blogger had favorites) is opening their 20th season of doing theater musically with Man of La Mancha, a 400-year-old story beloved in musical and many other forms. At its core this is a story about optimism and hope, about seeing the good in people and the world, even when everything you see and everyone you meet tells you otherwise. It's about clinging to and fighting for ideals of chivalry, decency, and honor in the face of evil and corruption. In other words, it may be exactly the story that this world, and this country in particular, needs right now. As usual, Theater Latte Da puts its own unique re-imagined spin on the 1964 classic that heightens the relevance of the piece. An incredibly talented and beautifully diverse cast about half the usual size for this musical, a small but powerful four-piece orchestra, and a modern twist to the play-within-a-play structure make this Man of La Mancha an inspiring, moving, and engaging piece of theater musically, just as I have come to expect from Theater Latte Da.

As you might remember (and if you don't, the playbill is filled with informative timelines and history), Man of La Mancha is set in a prison during the Spanish Inquisition, where playwright Miguel de Cervantes must defend himself and his play about Don Quixote, the foolishly idealistic knight in an era when knights are going out of fashion. Latte Da's version is set in a modern and cold waiting room, perhaps a deportation center, but not explicitly so. Entering the Ritz Theater, much of the cast is already seated on stage, looking bored or frightened or annoyed as they await their fate. The show begins when Cervantes enters and begins telling his story, enlisting the other prisoners/detainees to take part, who do so reluctantly at first but with growing enthusiasm.

Within the story of Don Quixote, we watch as "the maddest wise man, or the wisest mad man" looks for dragons to fight and fair ladies to rescue, with his eager squire Sancho Panza. Everyone around him, including said fair lady Aldonza, whom he calls Dulcinea, thinks he's nuts. But many grow to be on his side as they see his pure motive - to fight for what's right. Some of his family and friends attempt to shake him out of the illusion and back to reality, which they succeed in doing, to his detriment. In the end he leaves those he has touched better for it, like Aldonza who calls herself Dulcinea and sees herself as he saw her, as they continue Don Quixote's fight for a better world.

Martín Solá makes his #TCTheater debut, direct from Broadway (he left On Your Feet, the Gloria and Emilio Estefan bio-musical, just last month to do this show), and he's as wonderful a Don Quixote as one could ask for. Noble and sympathetic and slightly crazy, he makes it easy to see why Don Quixote won so many people over to his side. And what a voice! The rest of the 11-person ensemble (plus a few extras) is made up of #TCTheater favorites, including Zach Garcia as an adorable Sancho Panza. Meghan Kreidler brings her trademark fierceness to the role of Aldonza, her tough exterior making her eventual softening even more moving. Rodolfo Nieto brings his powerful voice and presence to several roles, I only wish we got to hear him sing more. Really everyone in the ensemble (which also includes McKinnley Aitchison, Dan Hopman, Sara Ochs, Jon-Michael Reese, Matt Riehle, Andre Shoals, and Guillermo Rodriguez Zermeño) is fantastic, stepping in to play multiple roles in the story, and silently watching from the side of the stage when not.

Cinder block walls have been built around three sides of the stage, with a glass guard's room behind, looking every bit the cold and sterile waiting room, an unpleasant and unwelcoming place to be. It's transformed into the landscapes of Don Quixote's imagination with the addition of a few clever props and pieces. The same happens with the ensemble's modern day clothing, as they become knights, ladies, and monks when pieces (including creepy cool masks) are added, a process which sometimes happens right on stage (scenic design by Michael Hoover, costume design by Rich Hamson). Denise Prosek's off stage four-piece orchestra sounds bigger than it is, and gets a little help from ensemble members for a few songs.

Peter Rothstein and Theater Latte Da seem to just what show we need at any given time (see also last fall's sublime Ragtime), and have done so again with Man of La Mancha, playing at the Ritz Theater in Northeast Minneapolis through October 22. Click here for more info and to purchase tickets, and make note of the $29 Saturday matinees and post-show discussions after most Thursday and Sunday performances.

Of course we can't just bury our head in the sand or a story (or sheet cake) when the world gets tough. But sometimes it helps to immerse ourselves in a fictional world where things make sense, where noble knights fight against tyranny and win. Sometimes it's the escape we need to be able to get up in the morning and face another day of hurricanes, senseless tweets, horrific violence, and damaging legislation. And then take up our fictional swords, mount our invisible horses, and tilt against the very real and scary windmills in the world.

This is my quest, to follow that star,
No matter how hopeless, no matter how far
To fight for the right without question or cause
To be willing to march into hell for a heavenly cause

And the world will be better for this
That one man scorned and covered with scars
Still strove with his last ounce of courage
To fight the unbeatable foe, to reach the unreachable star