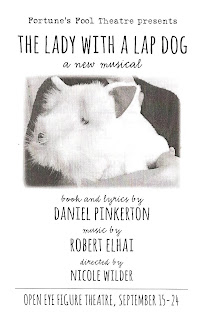 Attention lovers of small, intimate, beautiful new musicals! Fortune's Fool Theatre is presenting just such a piece at Open Eye Figure Theatre for two short weekends only, of which this is the final one. Unfortunately it opened on the same weekend as about a dozen other #TCTheater shows and I was unable to catch it until a few nights ago, and now just two performances remain. But if you hurry, there's still time to see The Lady with a Lap Dog. Based on one of Chekhov's best known short stories, with just a three-person cast and a three-piece orchestra and about 80 minutes long, it's a lovely little piece and shouldn't be missed by anyone who loves new (and locally created) musicals.

The Lady with a Lap Dog was first presented as part of Nautilus Music-Theater's monthly "Rough Cuts" series. In just the 20 minutes completed at the time, it showed great promise. Daniel Pinkerton (one half of Fortune's Fool Theatre along with his daughter Ariel Leaf, who designed the warm lighting) has adapted the short story into a succinct 80 minutes, mostly sung, to Robert Elhai's beautiful and interesting score. The story is of an affair between two married people, Dmitri and Anna, the titular lady. Anna finds happiness for the first time in her life through Dmitri, and although Dmitri has had many affairs, this is the first one that has touched his heart. After the brief vacation romance has ended, Dmitri can't forget about Anna, and goes to visit her, seeking a way to continue the relationship even though within the confines of their 19th century lives there's no better solution than to meet in secret every couple of months. Like the story, the musical ends with no resolution, just a beautiful ache in the heart.

The cute little stage at Open Eye Figure Theatre is the perfect space for this piece, with just a bed and a table or two representing the world of the story (set and properties designed by Ursula K. Bowden). The three-piece orchestra consists of piano (played by music director Jill Dawe), cello, and accordion, creating a unique and charming sound. And the three-person cast, unmiked in this small space, sound beautiful, especially in harmony, and create sympathetic characters. Joel Liestman and Andrea Leap reprise their roles from "Rough Cuts" (the piece was, in fact, written for them), while Laurel Armstrong threatens to steal scenes with her varied portrayals of multiple characters, including Dmitri's "formidable" wife. All are dressed appropriately in smart and polished period clothing (costume design by C.J. Mantel).

I think The Lady with a Lap Dog is what one would call a "chamber musical," meaning an intimate story told by a small cast and accompanied by a small orchestra. Small in size perhaps, but not in quality or importance. It's a refreshing change of pace from the large scale flashy type of piece that one usually associates with the word "musical." You have two more chances to support this lovely locally created new musical!