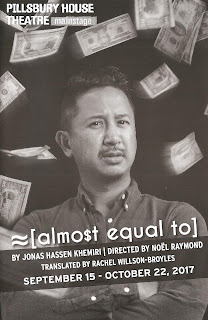 Swedish playwright Jonas Hassen Khemiri's* work makes its area debut with Pillsbury House Theatre's excellent production of the odd and oddly titled ≈ [almost equal to]. But odd in a good way, odd in that it's uniquely structured and covers many topics and doesn't always entirely make sense. In fact pre- and mid-show announcements break the fourth wall a bit and tell us what to expect (or not). According to the program, the play "is a commentary on the constraints and effects of living within a capitalist economic system." A mix of economics, sociology, and family drama, ≈ [almost equal to] will leave you questioning the very meaning of money. In a world with vast inequalities of wealth, that's a worthy thing to think about in a play that's also engaging and entertaining.

The play has many moving pieces, interrelated storylines, inner voices, and a few repeated scenes. But while it's not always entirely clear where we are or where we're going, you never feel lost thanks to Noël Raymond's clear direction (walking the fine line between comedy and tragedy) and the terrific cast of five very versatile actors (Jay Eisenberg, Paul de Cordova, Randy Reyes, Sun Mee Chomet, and Tracey Maloney) who all play multiple roles. Christopher Heilman's set consists of a wall of pale wood with a section that works as a marker board (for writing mathematical equations, be still my heart!), and doors and windows that open. The stage within this wall is draped with a gold fringe curtain like a game show, revealing the framework of a room behind it.

I'm not even sure how to describe the plot, which consists of a bunch of pieces that are and aren't related. We begin with an economics professor Mani whose lectures on the history of economics are really quite fascinating (and include mathematical equations!). We also separately meet his girlfriend Martina, who comes from a wealthy family but works at a convenience store and dreams of running an organic farm. Mani accuses her of romanticizing poverty, but assures her (and us) that poverty is not romantic, it's harsh and cruel. Martina befriends a homeless man who begs outside the store, causing Mani to get jealous. Recent high school graduate Andrej comes to resent the homeless man who he thinks is making up a story about needing money to visit his sister. He can't find a decent job, and his mother reminds him to fight the evil spirit of Mamona - greed and wealth.

This is one of those plays that make things difficult for bloggers because it's hard to talk about. But it's pretty ingenious and innovative in its storytelling, educational and thought-provoking without being dry or preachy, outrageously funny and deadly serious. It takes place in the present in an unnamed city, and with the exception of a few things that my friend in the Nordic community says are very Swedish, the play could be set in any city in the Western world. It will definitely make you react differently the next time a homeless person asks you for spare change, and think twice about what those 401k investments really are.

≈ [almost equal to] continues through October 22. In my opinion, ≈ > UX (user expectation). Sorry, economics joke, you'll get it if you see the play, and you should.


*You can read more of Khemiri's work in the New Yorker.