"mONSTER" by Swandive Theatre at the Southern Theater 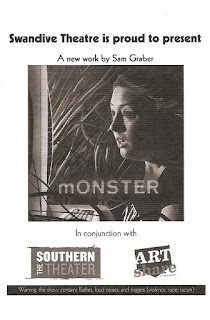 You'd think that with as much theater as I see (over 250 shows last year), I've seen every theater company in town (an ever-growing list currently at about 75 per this year's Iveys). But I'd never seen a show by Swandive Theatre before last night, when I attended opening night of their original play mONSTER (by Sam Graber) with the Twin Cities Theater Bloggers. In my defense, although they've been around since 2005, they typically only do one show a year. But I'm happy to have finally made their acquaintance (thanks to my colleague Gina at the most awesomely titled #TCTheater blog The Room Where It Happens) with this original, thought-provoking, beautifully designed play.

The play takes place on a college campus in the fall of 1994 (a year that I also spent mostly on a college campus). Anyone watching this season of the underrated AMC drama Halt and Catch Fire will see the similarities in the early days of this thing we call the World Wide Web. On Halt, there's a race not to develop the first PC (as in the early '80s-set first season), but essentially to map the internet. This was at a time when anti-hero Joe MacMillan (the brilliant Lee Pace) could write down the address of every website on a series of post-it notes. Partner Gordon and his 14-year-old daughter Haley (because kids and technology) turn it into an online catalog, but the exponentially increasing number of websites soon outpaces their ability to index it. Meanwhile, Gordon's ex/Haley's mother Donna and her powerful VC firm are racing to develop the first online search engine, a thing we now take for granted in Google. But of course, the show's not really about technology, it's about how technology affects us and how we live our lives around and with it. Which brings me back to mONSTER.

Nessa (Jamie Fields) arrives on campus to find Brill (Kelsey McMahon) in what was supposed to be her single dorm room. No matter, Nessa just wants the "college experience," i.e., boys and drinking and parties, and is willing to put up with oddball Brill. Because Brill never leaves the room, never leaves her massive computer setup except to sleep 20 minutes every 4 hours. All that she'll say about what she's doing is that there's a monster in the bowels of the internet and she has to keep it from spreading or "the world will go berserk," mapping websites like Joe MacMillan, which becomes a sort of a Lost-esque "push the button every 108 minutes or the world will end" mission. RA Greg (Avi Aharoni) is the only other person who knows about Brill's mission, and since he's studying engineering and morality it's something he's particularly interested in. Nessa, despite being a party girl, is smart and studying cartography. Greg asks her to map Brill's system so that he can recreate it.  But of course, the monster gets loose and the entire campus, the entire world, falls under its spell, staring at screens instead of doing outdoors or social things like going to the tailgate party.

Because of course the monster isn't really a monster, it's an allegory for the way that the internet has become inextricably intertwined with our daily lives, to the point that we've forgotten how to function without it. Partway through the show, a bunch of startling images and statistics about cyber-bullying flash across the back wall of the theater, a not so subtle warning to get the monster under control before it's too late.

But of course, like any technology, the interweb is neither good nor evil. It's how we use it that makes it good or evil. And Swandive provides a handout after the show about the good things the internet brings, like information, jobs, and communication. Which is perhaps a counter-balance after they've scared the crap out of us. The point, I think, is that our morality, ethics, and laws need to catch up with the technology that has gotten away from us, and I'm not sure how we do that when technology is changing every day.

The vast space at the Southern Theater has been made more intimate by Seán McArdle's set, which creates a small dorm room space in the middle of the floor on a sloped platform, with a spider-web of wires connecting it to the outer walls of the theater. Most of the scenes take place in the crowded room, with a few monologues delivered on either side of it, a nice use of the space. Jesse Cogswell's lighting design places small twinkling lights on this spider-web that makes for some cool effects. The cast (directed by Swandive co-founder Meg DiSciorio) is great - Jamie as the gregarious Nessa, Kelsey as the closed off Brill, Avi as the adorkable Greg.

mONSTER continues through October 7, check it out for a haunting look at technology that may just make you rethink your relationship to it ($10 tickets available on Goldstar). (And you really should also check out Halt and Catch Fire, it's a great show.)