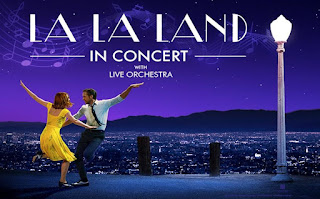 This season, the Minnesota Orchestra is offering a series of movies played in their entirety with the music track removed and replaced with the orchestra playing live. What could be better than to see an old or new favorite movie with those familiar scores played live by our fantastic orchestra? Last night I attended the first in the series, La La Land (aka the movie about how Ryan Gosling saved jazz). While La La Land famously didn't win the Oscar for best picture this year, it did win for best score (Justin Hurwitz) and best song ("City of Stars," Hurwitz along with Pasek and Paul, who also won a Tony for best score this year for Dear Evan Hanson). I'm a fan of this delectable musical fantasy romance movie, and an even bigger fan of the soundtrack, which I've been listening to all year. The orchestral and jazzy score is the perfect choice for this series, and made for a perfectly dreamy evening of music and movies.

This was my first time seeing a full movie with live orchestra accompaniment, although I did see excerpts of Rodgers and Hammerstein movies accompanied by the orchestra. Technology allows them to remove only the music from the soundtrack and play the singing, dialogue, and other sound effects of the movie. Then it's up to the conductor, in this case the fabulous Sarah Hicks, to add the live music with the precise timing to match what's happening on screen, which she did beautifully. This causes a dilemma, whether to watch the movie playing on the screen, or to watch Sarah and the musicians as they bring the score to life.

The La La Land score really shows off all parts of the orchestra. Obviously it's very piano heavy (with Markell C. Brooks beautifully playing the role of Ryan Gosling's hands), but there are also some great brass moments in the jazz parts, as well as woodwind features, and percussion, and some sweeping string moments. Not only does the orchestra play the songs on the soundtrack, but also all of the underscoring, even if it's just a few seconds of sound. It's kind of fun to watch the big fight scene while the orchestra plays smooth jazz under it, until they stop and the silence rings louder than the music. After a while I was able to get lost in the fantasy of the movie (Ryan Gosling dancing in two-toned shoes, yummy costumes, dreamy fantasy sequences, and cinematography that makes me want to visit L.A., something I've never had the desire to do) and still observe and appreciate the musicians.

The movies and music series continues with:
Other concerts that might be of interest to musical theater fans:

As a former band geek (I played the clarinet all through high school and a bit in college, if you're interested) who's too busy with theater to go to the orchestra, I appreciate concerts like this that give me an excuse to do just that. Visit the Minnesota Orchestra's website for their full calendar of events.