"How to Use a Knife" at Mixed Blood Theatre 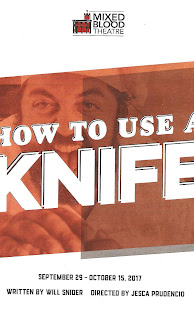 About their newest production, Mixed Blood's Artistic Director Jack Reuler notes, "How to Use a Knife is definitive Mixed Blood: hilarious until it's not, propelled by catalytic cultural collisions, simultaneously political and theatrical, timely in America and in our own Cedar Riverside neighborhood, multi-lingual, and 90 intermissionless minutes." If you think this sounds like a recipe for a delectable and satisfying theater meal, you are absolutely correct. Will Snider's new play is a tragicomedy that takes place in a restaurant kitchen with diverse, clearly drawn, realistic characters, brilliantly brought to life by a fantastic cast, with a completely engrossing story that'll leave you wondering just who the bad guy is in this story, and maybe realizing that defining a "bad guy" isn't all that simple.

All I know about restaurant kitchens is what I've learned from watching Top Chef, which is that it's a high pressure, fast-moving, rough-talking, exciting environment. How to Use a Knife confirms that impression. At a steak and burger joint in Manhattan, the jerky owner Michael (Michael Booth at his jerky-est) brings in an old pal George (Zach Myers, both terrifying and sympathetic) to be the new head chef. We get the sense that George is coming back from some sort of downfall, and Mike is doing him a favor by hiring him. George shows the current employees who's boss, including Spanish speaking cooks Miguel (Jake Caceres, providing much of the fun and humor) and Carlos (a sly Raúl Ramos), African dishwasher Steve (a sweet-tempered but steel-cored Ansa Akyea), and young busboy Jack (Maxwell Collyard, who has some experience in that role). There's a lot of yelling, swearing, and bullying as George gets the kitchen in order, but Steve stands apart from the chaos. He doesn't yell and in fact rarely speaks, doesn't drink, and never gets angry. George and Steve soon strike up a friendship as they teach each other cooking and sober thinking, respectively. It soon comes out that Steve has a secret from his past too, specifically his involvement in the Rwandan Civil War and its aftermath. When an INS agent (a stern Taous Khazem) comes to the kitchen looking for a war criminal, George must make a decision and reconcile the horrific accusations with the kind and gentle man he knows.

The hilarious, sobering, completely engrossing How to Use a Knife continues through October 15. Reserve a seat for $25 online, or take advantage of their "Radical Hospitality" program in which all seats (if available) are free two hours prior to the show.