"The Music Man" at Artistry 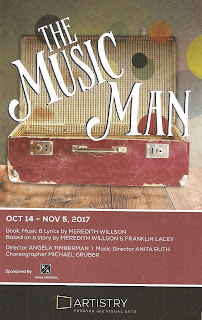 The Music Man is a classic of the American musical theater canon, and one that's held up fairly well with no uncomfortable racism and relatively little sexism (why does it still have to be a "boys' band?"). And Meredith Wilson's score is a winner, ranging from what might be the first musical theater rap song to gorgeous romantic duets. Artistry excels at these sorts of musical theater classics, so it's no surprise that their new production is a charmer. This also seems to be the sort of show that appeals to their core audience, judging by the fact that the entire run is already sold out. I would say that if you're looking for a good old-fashioned heart-warming, foot-stamping, enjoyable musical, head down to Bloomington. Except that you're pretty much out of luck for this run (call the box office to see if they've got anything left). Make plans to enjoy the rest of their 2017-2018 (which began with a bang in the form of an inventive and super-cool Joseph and the Amazing Technicolor Dreamcoat, which I'm guessing did not appeal to their core audience quite as much). I'm most looking forward to the final show of this season, the much more infrequently produced Sondheim masterpiece Follies.

You all know the story - a con man comes to a small Iowa town to sell them band instruments, uniforms, and a false promise of musical instruction, bringing music and new life to the stolid town, all the while planning to skip town after he collects the money, until he unexpectedly "gets his foot caught in the door on the way out," realizing that he needs these people to believe in him as much as they need someone and something to believe in. Professor Harold Hill is an expert salesman with a knack for knowing exactly what people need to hear and telling it to them in the most appealing way. He wins the town over person by person, giving the children something to focus on and look forward to, convincing the bickering school board to become a barbershop quartet, prompting the busybody ladies to form a dancing society.  But music teacher and librarian Marian, a proud, guarded, and bookish "old maid" with high standards is not so easily won over. She knows the truth about Professor Hill, but when she sees her troubled and withdrawn little brother begin to blossom under his friendship, and the town come together as one, she sees that "the truth" about Professor Hill doesn't really matter. What matters is the joy that he's brought to the town, and even if he does skip town, he will leave them better than he found them.*

A few noteworthy things about this production:

This show also marked the first Twin Cities Theater Bloggers' event at Artistry. We were invited to come early and meet with the cast, as well as take a backstage tour. It's always fun to experience theater with my fellow bloggers, meet the artists, and get a peek into what happens behind the scenes.

I thoroughly enjoyed another visit to River City, Iowa by way of Bloomington, Minnesota. If you're lucky enough to have tickets, you likely will too. Otherwise check out what else is going on in Bloomington this season.

*Plot summary borrowed from what I wrote about the Guthrie production two years ago.