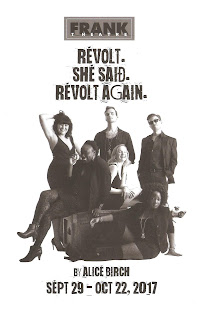 Potatoes and bluebells and watermelon, oh my! Just before Frank Theatre's production of Alice Birch's new play Revolt. She Said. Revolt Again, I posted on Instagram: "I'm not sure what I'm in for but I'm pretty sure it's gonna to be awesome. And 70 minutes no intermission." I was right on all counts. I'm still not entirely sure what happened, but it definitely was awesome, and short. Short, intense, and powerful. A six-person cast, a half dozen or so scenes, and a descent into organized chaos. All around the concept of feminism, and deconstructing our assumptions and language around it. Brave and outrageous and impactful and yeah, pretty awesome.

At the beginning, the play is structured as a series of short scenes utilizing two or three of the cast members, conversations between lovers or coworkers or family. Scenes have commonalities (see the opening sentence of this post, as well as the feeling of being tired and not understanding). Titles are projected onto a screen behind the stage:

Things start to get a little wild in the last scene as more titles roll by, which leads into the aforementioned organized chaos that is GALVANIZE. So many things happening at once it's impossible to catch them all, or even try. Short scenes or single lines of dialogue that range from disturbing to funny (I couldn't help but laugh at Joy Dolo twirling through the chaos announcing, "I am literally wearing no make-up!"). And then finally, a call to action, because "the thought isn't enough." Wow, does that ring true right now.

Frank's Artistic Director Wendy Knox does an amazing job as director here, keeping the chaos somewhat controlled and setting the right tone in each scene. And she has a wonderful cast to work with (Charla Marie Bailey, Emily Grodzik, Gabriel Murphy, Grant Henderson, Jane Froiland, and Joy Dolo) who are all fierce and vulnerable and committed to the storytelling. Kellie Larson's properties design is utterly fascinating, with varied accoutrements of daily life (particularly a woman's life) hanging from the ceiling, including dolls, pots and pans, silverware, glasses, bras, shoes, and what I believe were My Little Ponies in a cage. The cast was dressed in crazy/cool costumes (designed by Kathy Kohl) that helped define the multiple characters.

Revolt. She Said. Revolt Again continues through October 22 at the new Gremlin Theatre space, which I always like to point out is next to Lake Monster Brewing. You might need a drink (or three) after this one. There's a lot to unpack with this one, so take note of the post-show discussions following Sunday matinees involving experts on the topic. 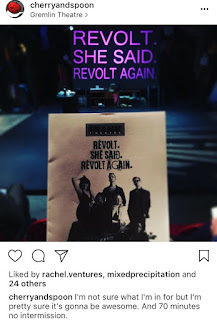