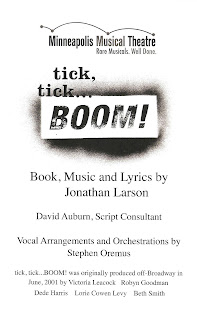 Before Jonathan Larson wrote RENT, for which he posthumously received the Pulitzer Prize, he wrote and performed in an autobiographical one-man musical in the early '90s about being a struggling musical theater composer living in NYC. After his tragic death the night before the first Off-Broadway preview of RENT, the eventual smash hit that what would become his legacy, this little show was reworked into a three-person piece by playwright David Auburn and produced Off-Broadway in the early aughts. Being a RENThead, I saw tick, tick... BOOM! on tour at that time, but I don't recall there ever being a local production of it. Leave it to Minneapolis Musical Theatre, whose motto is "rare musicals, well done" to bring us this charming little show that very clearly displays the seeds that would become RENT. With a fantastic cast in the intimate theater space at Bryant Lake Bowl, it's a very satisfying evening for RENTheads, musical theater history buffs, and anyone who likes a rock musical with heart and humor.

Similar to its beginnings as a one-man show, tick, tick... BOOM! is largely a composer named Jon telling us his story in monologue and song. In this updated version, we also hear from his girlfriend Susan, his buddy Michael, and various other characters. Approaching his 30th birthday, Jon is having an early mid-life crisis. He hasn't had a big hit yet, and is wondering if he should continue pursuing his dream of musical theater, or give up and get a more steady job like Michael, the marketing exec. Everything seems to hinge on the upcoming workshop for his musical Superbia; he's hoping it turns into something more. At the same time, Susan starts to talk about leaving NYC and starting a family away from the hubbub of the city. Finally, Michael confesses that he's sick with an unspecified illness (but he's a gay man in 1990 NYC so it's not hard to guess). But like the characters in RENT, Jon manages to find the joy amidst the pain and confusion of life. No day but today.

While tick, tick... BOOM! is for the most part a fun and joyful musical, there's a tinge of sadness knowing that this aspiring artist who dreamed of writing the HAIR of the '90s, of bringing rock music to Broadway, of being a success on Broadway, would eventually do all of those things, but not live to see it.

tick, tick... BOOM! is a precursor to RENT in many ways and shares some similar themes and devices, including starving artists who live in a walk-up apartment with no doorman so you have to "throw down the key," a friend who has sold out and entered the corporate world, phone calls and voice messages from well-meaning parents, AIDS and mortality, the importance friendship and community, and NYC as a character. It's as if the world of tick, tick... BOOM! was expanded on, dramatized, and filled out to become the world of RENT.

The score of tick, tick... BOOM! also feels RENT-ish, from driving rock songs to poignant ballads. Larson included several musical theater references, most notably in the song "Sunday," a clever parody of a song from his idol Stephen Sondheim's Sunday in the Park with George, only set in a diner with annoying customers.

MMT and director Megan Lembke have assembled a powerhouse three-person cast. Matt Tatone is a passionate and empathetic Jon. Daniel Greco and Katie O'Halloran as Michael, Susan, and others provide great support and harmony, and each get a moment to wow the crowd on their own, Daniel in the poignant "Real Life" and Katie in the Superbia song "Come to Your Senses." They all sound great, especially as a trio. Music Director Alison Shirk on piano leads the small but mighty three-piece onstage rock band, who also get to be part of the action.

tick, tick... BOOM! plays Friday and Saturday nights at 7 through the end of October at Bryant Lake Bowl. Doors open at 6 and full food and beverage service is provided in the theater, so get there early and make it a rock musical dinner theater night.