"Mala" at the Guthrie Theater 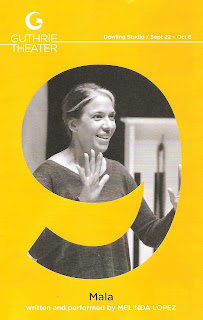 Boston-based theater artists Melinda Lopez returns to Minneapolis, where she lived and worked in the mid-90s, including at the Playwrights' Center, with her one-woman show Mala. I made a spur of the moment decision to see it last night and I'm glad I did (and not just because it kept me from watching the Twins lose to the damn Yankees, again). Mala is one of those laughter-through-tears shows, which are really the best kind. She talks about what she calls the most ordinary part of life - dying. In just about 75 minutes she invites you into her life and family until you feel like you know them intimately, and miss them when they're gone.

Melinda speaks directly to the audience in a very conversational way. She even tells us after the pre-show "turn off your phones" announcement that we can leave our phones on if we're caring for a child or an old person or a pet that might need us (I think she's kidding?). She tells the story of her 92-year-old mother who is dying of nothing other than being old. But it's not a linear story, she goes back and forth a bit in time as people do when they're telling a story, talking about childhood memories (not all good), and the first year of raising her daughter (not all good), as she continues the slow progression towards death (as do we all).

At the end of their life, Melinda's Cuban immigrant parents lived in an apartment attached to the house she shared with her husband and daughter. Melinda made the decision for her father to live in a nursing home after he broke his hip and her mother could no longer care for him, but was determined not to do the same with her mother. So eventually, when it became clear there was nothing the doctors could do to, she brought hospice into the home. But Mami did not go quietly. Melinda shares that she was often combative and angry (the world Mala means bad, which she often called her children) as she lost her independence, not calm and wise as we imagine the dying to be. And she also shares that not everything contains a lesson, some are just things we have to live through. But I didn't find this a depressing play, sad yes, but so is life. Even though it doesn't make it any easier to let go, we should all be so lucky as to die of old age at 92 in our own home surrounded by those we love. Melinda is honoring her mother's ordinary (read: universal) experience by letting us share in the bearing witness of it.

Melinda shares her story on a simple, white, light stage with just a few pieces of white furniture. Projected onto the white drapery behind her are words - words she types on her phone note-taking app as a sort of journal, translations of the Spanish that her mother usually speaks, and topics for discussion. She often interacts with those words, and sometimes says things like "this is the part of the play where..." (there really is no fourth wall in this play, we're just all in the room together). Very subtle projections hint at the snow of a blizzard or the lightning of a storm (scenic design by Kristine Holmes, lighting design by Scott Pinkney, projection design by Ari Herzig).

Mala is playing through this weekend only in the Guthrie Studio as part of their Level Nine initiative, in which seats are just $9 (for real, no added fees). If you can spare 75 minutes and $9, go see this funny, heart-warming, heart-breaking show.