"Nature" by TigerLion Arts at the Minnesota Landscape Arboretum 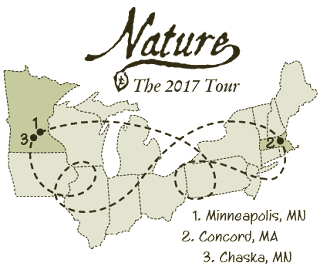 "This one thing I know for sure, we must all return to Nature." So says Henry David Thoreau in TigerLion Arts' outdoor walking play Nature, and I couldn't agree more. That's one of many reasons why I love this unique theater piece so very much and saw it last weekend for the fourth year in a row. It's truly one of my favorite theater things. Nature checks off all of my theater boxes: it's funny, whimsical, poignant, musical, physical (for performers and audience), immersive (but not interactive), historical, spiritual, inspiring, silly, 90 minutes no intermission, and performed in the best location ever - the great outdoors. It fills my heart with joy and my mind with challenging thoughts about the interaction between civilization and nature. The 2017 tour (which included a trip to Concord MA for the celebration of the 200th anniversary of Thoreau's birth) has concluded, but follow TigerLion Arts on Facebook and/or Twitter for information on future performances and an upcoming documentary. As long as TigerLion Arts keeps performing Nature and there exists Nature in which to perform it, I will follow them on this beautiful journey.

Nature tells the story of  writers, philosophers, scholars, Transcendentalists, and friends Ralph Waldo Emerson and Henry David Thoreau. Both found inspiration in Nature, but in different ways - Waldo the minister and lecturer who traveled the world bringing his words to the people, Henry the pencil-maker's son who preferred to live by himself in a cabin on Waldo's property. The story is told in four locations, with the audience following the cast from one location to the next, invited to take a walk and experience Nature for themselves, as these two men so loved to do.* Returning to the Arboretum where it all began, this year's performance was located at the new Bee Center by a gorgeously restored old barn. It stopped raining just before the show began, resulting in wet and muddy conditions for artists and audience alike. But that's part of the experience of being in Nature, and the cast bravely went with it and incorporated the challenges into the piece.

The story begins at a church, represented by a row of pews and an altar, where Emerson and Thoreau break into a traditional church service to proclaim the glory of Nature. After a brief introduction of the two men, charmingly told by the ensemble with physical theater style, we walk through the fields to the second location. In one of my favorite scenes in the play, we watch Henry and Waldo walk and talk far away from us, exaggeratedly miming speech and action, as the ensemble behind us speaks their words as one. The third location is a quaint little open-air cabin, which serves both as Henry's remote solo cabin, and Waldo's home that he shared with his wife Lydian and their children. The final location is a field where Henry is growing beans and complaining about "progress." This is where the rift between the men first appears, Waldo arguing that some progress is necessary. The rift deepens back at the cabin, where Henry lives with Waldo's family while he is overseas on a lecture tour, only to come home and find that Henry has taken his place. The two men argue as we follow them back through the woods and to the church, where they're reconciled only after Henry's death when Waldo speaks at his funeral. All through the journey Nature is with them, lovingly watching over them and guiding them, and at the end reminds them that She is what brought them together in the first place.*

As always, Emerson is perfectly portrayed by Tyson Forbes, the great-great-great-grandson of Emerson and one of the writer/ creators of this piece. Nature is obviously a labor of love for Tyson and his wife, writer/ producer/ director Markell Kiefer, co-Artistic Directors of TigerLion Arts, with their two adorable boys running around in costume making it a true family affair. They created the piece back in 2010 and continue to tour and develop it every year. This piece is one of the best examples of "content dictates form" I've ever seen in the theater; there is no better way to tell this story of these two men, their friendship, and their reverence for Nature than immersed in Nature itself.*

Much of the ensemble returns from past years, along with a few new faces, with a great feeling of playfulness and trust among them. New to the show this year is Michael Wieser as Thoreau, his shaggy beard and hair a contrast to Tyson's Emerson, the embodiment of his ancestor, tall and distinguished in black coat and top hat. Michael brings a passion and intensity to any role he plays, whether it's a Sneetch or a man fighting to bring attention to AIDS in the early days of the crisis. Watching him kneeling in the mud a few feet in front of me, tenderly placing a worm onto the ground, was a thing of beauty. He thoroughly became Thoreau for me over the course of 90 minutes, as much as Tyson becomes Emerson after years of personifying him.

No one else could play the most important character in the play, Nature herself, than Norah Long with her golden voice, playful fiddle playing, and expression of pure joy and love on her face. Music (with original compositions by Dick Hensold as well as traditional songs) adds greatly to the experience, sung by Norah, the cast, and the volunteer community choir, and played on percussion by Nathan Gebhard and various pipes, flutes, guitars, and other instruments by Andrew Forbes. The entire ensemble (which also includes Aeysha Kinnunen, Kevin Fanshaw, Laurie Witzkowski, Matt Sciple, Shana Berg, and Tony Sarnicki) is a joy to watch as they create these characters, their physical world, and the feeling of love of Nature.

Nature is one of those rare pieces that transcends theater, that's not just about sitting and watching a story unfold. It's about experiencing the world of the story, and the world around us, not just for the short time of the performance but also to carry with us into our daily experience with Nature.

*Some of this post is borrowed from what I wrote about past productions I've seen.