"All the Way" at the History Theatre 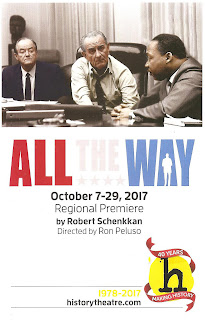 The night after seeing the historical political drama Watch on the Rhine at the Guthrie, I saw the historical political drama All the Way at the History Theatre. That was a couple of pretty heavy (and long) nights, and left me feeling dismayed at just how much history repeats itself. With Watch on the Rhine, it's the rise of fascism in 1930s Europe, genocide, and an impending world war. With All the Way, it's political machinations, the Civil Rights movement, and the ugly opposition to freedom and equality for all. Covering Lyndon B. Johnson's short and eventful first presidential term, from Kennedy's assassination that thrust him into the presidency to his re-election (or rather, first election) one year later, All the Way has a lot of history and historical figures to pack into three (yes, three) hours. While I wish that playwright Robert Schenkkan had consolidated characters and compressed speeches a bit to create a more concise and driving story (the days of me being able to sit comfortably through a three-hour play are long gone), it's a gripping story, well told by director Ron Peluso and an excellent cast.

Over the course of a year in the oval office (beautifully and roundly represented on the History Theatre's thrust stage by Rick Polenek's set), LBJ tries to honor JFK's legacy by doing what he was unable to do, pass the Civil Rights Act, while still placating the Southern motherf**kin democratic republicans enough that he could win the election (I couldn't help myself, this Hamilton quote kept running through my mind). The hoops that he had to go through, the people he had to threaten or suck up to, will make TGIT viewers think of Scandal (but without the murder). And the demonstrations, protests, and counter-protests will make one think of the daily news. 1964's "Freedom Summer," a campaign to register black voters in the South, both helped and hurt LBJ's efforts to pass the legislation. But he somehow managed to both pass it and win the election.

This play has a huge cast of nearly 20 excellent local actors, none better than Pearce Bunting as LBJ (the role for which Bryan Cranston won a Tony in his Broadway debut). He's always a fun actor to watch, but this is one of his best performances as he disappears inside the character of LBJ, and what a character he was! Pearce has it all - the accent, the mannerism, the laugh, the rage, the desperation to accomplish his goals. His performance is the number one reason to see this play (other than the important history lesson). He's surrounded by too many talented men to name (highlights include Shawn Hamilton as Martin Luther King, Jr. and Andrew Erskine Wheeler and Joe Nathan Thomas as Minneosta's own Hubert H. Humphrey and Roy Wilkins, respectively), plus three great women (Jennifer Blagen, Patty Mathews, and Jamila Anderson) who play mostly wives and secretaries. It's quite sobering to see how these important conversations and decisions involved primarily men, reiterating the importance of having women in the room where it happens (second Hamilton reference - what can I say, it's a play about politics!).

LBJ is sitting at his desk for much of the play, and many of the conversations play out over the phone. How to make that dramatically interesting? Have the person on the other end of the line step forward from the circle where the ensemble is sitting for much of the play, then turn around and converse directly with LBJ as he drops the receiver. Even when the location is elsewhere, like discussions between MLK and NAACP, LBJ is there in the background, poring over paperwork at his desk. And behind him, actual historical images are displayed, adding visual impact to what these men are talking about (video design by Kathy Maxwell).

As always at the History Theatre, All the Way is a historical play that reminds us of our past and how it affects our present. It's well done political historical drama, just make sure to take a nap or grab a cup of coffee before you go, because you're in it for the long (but worthwhile) haul (continuing through October 29).