"Playlabs" at The Playwrights' Center 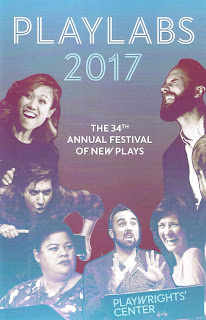 It's late October in Minnesota, and that must mean it's time for... Playlabs at the Playwrights' Center (you thought I was going to say Halloween, didn't you). In this week-long festival, three of PWC's core writers have the opportunity to work with a group of actors, a director, a dramaturg, and sometimes a designer on a new work. With just a few days of rehearsals, the plays receive two public readings, often with much rewriting between the two. This year I attended the final readings of all three plays, and was once again blown away by the creativity, thoughtfulness, and innovation of playwrights, as well as the talents of actors (many from the #TCTheater scene) in bringing these plays to life, even while standing in one place reading from a script.

In the year since last year's Playlabs Festival (the first I attended), I've become more aware of the work that The Playwrights' Center does, and just how far-reaching that work is. For over 40 years, Playwrights' Center has supported the development of countless plays across the country and right here in Minneapolis/St. Paul. As Artistic Director Jeremy B. Cohen noted, the apostrophe in the name of the center means that they're there to serve the playwright, to support them in whatever way they need in the play development process. That's a hugely important (and, I think, often underrated) service. We often complain about doing the same old plays over and over again, or wonder how to make old plays relevant. Here's one way - write a new play! With our tumultuous and fast-changing times, we need art to react to what's going on in our world, to hold up a mirror, to start a conversation. All of these plays do that.

Playlabs is over for another year, but The Playwrights' Center has frequent public readings, often free, so follow them on Facebook and check out their events page for upcoming opportunities. The next big event is the Ruth Easton new play series, in which a new play is read by a talented cast the first Monday and Tuesday of every month, December through April.

Here's a description of the three plays read last week. Watch for them at your local (or national) theater!

A Humbling in St. Paul
by Playwrights’ Center Core Writer Alice Tuan
Olive Chung comes to the Twin Cities to work on a new play and reconnects with her grad school friend Liz Manuel after being out of touch for a decade. While staying with Liz and her wife, Sharine Hopewell, and their pups, Bell and Musco, Olive gets what she thinks is food poisoning. It turns out to be much more mysterious and severe than anyone imagined. A play about the guest/host space, infection, the performance of normalcy, unseen presence, the body rebelling against the mind, optimism, gratitude, and, yes, friendship.
Director: Laurie Woolery**
Lighting design consultant: Karin Olson Stage manager: Audrey Rice Cast: Sophia Kim*, Marlina Gonzalez, Larissa Kiel*, Christing Weber* **Member of Stage Directors and Choreographers Society
*Member of Actors' Equity Association

FROM ALICE: “Writing this play saved me. Based on the freak infection I got a week after working on my play at the Playwrights’ Center’s Ruth Easton New Play Series in March 2016, it helped me process a near-death space and understand the windfalls and psychic strength culled from committing to a playwright life.”

Take Care
by Playwrights’ Center Core Writer Jason Gray Platt
Ella gathers her family together for the holidays to have the delicate conversation surrounding her end-of-life plans. But the emotionally strenuous conversation does not go as she had hoped. So the discussion happens again. And again. But each time another family member is missing, and the conversation goes slightly differently, until it becomes apparent that the end of Ella’s life isn’t the only approaching tragedy for which a plan needs to be made. Because time is running out.
Director: Tracy Brigden**
Dramaturg: Rachel Jendrzejewski Set design consultant: Kate Sutton-Johnson Stage manager: Aaron Wheeler* Cast: Linda Kelsey*, Maggie Bearmon Pistner, Tracey Maloney*, Kimberly Richardson*, Meredith Casey, Clarence Wethern* **Member of Stage Directors and Choreographers Society
*Member of Actors' Equity Association

FROM JASON: “When the child informs us that there is a monster under the bed, we tell her that there is no such monster so that she may sleep soundly. On the first few occasions, we make a spectacle of lifting the covers and looking underneath, so that the child may rest easy. Eventually we stop looking, confident in our knowledge that because there has never been a monster in the past, there can never be a monster in the future. The child is not prey to such logical fallacies. One day, there will be a monster. And we will not be looking.”

In the Time of the Volcano
by Playwrights’ Center Core Writer Jen Silverman
Henry has become the janitor at his kids’ high school after losing his job, while his wife Luce struggles to hold onto her own. Meanwhile, their two sons are struggling to understand their own potential as they become ever more aware of their parents’ failures. When strange news from the past reaches Henry, it explodes into all of their lives, changing how they see Henry—and ultimately themselves. A play about what happens when we’re offered a chance at dreams we didn’t even know we had…
Director: Jeremy B. Cohen**
Dramaturg: Kimberly Colburn Stage manager: Rosie Hartunian Alumbaugh Cast: Stephen Yoakam*, Angela Timberman*, Bowen Cochran, Justin Mark*, Stephanie Bertumen, Shelby Richardson **Member of Stage Directors and Choreographers Society
*Member of Actors' Equity Association

FROM JEN: “The play is inspired by research I’ve done about a ‘cargo cult’ on Vanuatu (a Pacific Island nation) that worships a mysterious man named John Frum. The cult is thought to have been formed around an American soldier stationed briefly overseas; even the name John Frum is thought to be short for ‘John from America.’ In thinking about what it means to worship a man who might, essentially, be utterly ordinary, I also began to think about what it means for an ordinary man to be worshipped—especially in this current cultural moment, where our country is embroiled in a volatile conversation about white male power, privilege, and entitlement. I’m excited to spend my time at the Playwrights’ Center digging into the first draft, and asking both big-picture questions about how the play fits into our national conversation and small-picture questions about character arcs and play structure.”