"Henry and Alice: Into the Wild" at Park Square Theatre 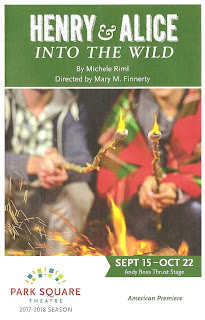 Three years ago, we met Henry and Alice in Sexy Laundry at Park Square Theatre, an "old married couple" with three kids who checked themselves into a swanky hotel to reconnect and spice up their relationship. They're back again in the sequel Henry and Alice: Into the Wild, this time downsizing from an expensive hotel to a camping trip due to Henry losing his job. At the time I called Sexy Laundry a "smart, funny, relevant play." But a lot has changed in three years, and a play about a rich white couple's troubles isn't so relevant anymore. Listening to a woman complain about not being able to buy Asiago cheese and having to cancel her yoga studio membership feels uncomfortable in a world with such inequality in wealth (see ≈ [almost equal to] at Pillsbury House for an excellent examination of that), at a theater in downtown St. Paul where I'm nearly always approached by someone asking for money (twice yesterday). There's still value in the play as it explores relationships and the downsizing required with economic downturns, which certainly is relatable to some people, and the winning cast makes it enjoyable to watch. I'm just not sure it's the play we need right now.

The entire play takes place at a camping site on a lake somewhere, so charmingly depicted by Kit Mayer's wide open set with trees, a firepit, and tents that it makes me want to go camping. I'm not a person who usually notices sound design, but I certainly did here as Jacob M. Davis' 360 sound design makes great use of the thrust space and has sound coming from all directions. Several times I turned to look for the noisy neighbor, or the kids playing in the lake, that sound like they were right out in the lobby. Into this world come Henry and Alice, the former eager to test his mettle against the elements, the latter bringing pillows she bought on sale at Pottery Barn. Henry has recently lost his job, which Alice prefers to call "early retirement," an opportunity for them to spend time together. But that illusion soon fades as Alice's free spirit sister Diana arrives and reality sets in.

Alice and Diana are total opposites, as sisters sometimes are. Diana roars in on a motorcycle, and has spent her life flitting from adventure to adventure (and man to man). Her arrival throws a wrench in the couple's plan for reconnection, but it does allow for the sisters to hash some things out in their relationship, and acknowledge a mutual respect for the other's choices. After an amusing incident Alice asks her sister to leave, and Henry and Alice spend the rest of their time making plans for their future.

Mary M. Finnerty returns to direct Henry and Alice again. John Middleton reprises his role as Henry, and still "excels at playing the beleaguered everyman." Since his real-life wife Charity Jones, who played Alice in the first play, is currently on the Guthrie stage as Lady Montague, Park Square has tapped Carolyn Pool to play the role. The two still have a believable chemistry as a married couple, and Carolyn gets to show off her range from slapstick comedy (those mummy sleeping bags!) to poignant drama to singing "Born to Be Wild" while perched on a motorcycle. Melanie Wehrmacher is a great third wheel as the fiery Diana.

Fortunately Alice's long spiel about all the luxuries she has to give up (which I referred to earlier) is followed by a monologue that rings much more true. When told she'll have to "get a job" now, she assures her husband and sister that she has a job, and has in fact been working since she was 15, paying her way through college, putting a down payment on their first house, raising three children, supporting Henry as he pursued his career, and now taking care of her aging father. This spot on pronouncement of the work that women do and the little value it receives is the best scene in the play, brilliantly written by playwright Michele Rimi and brilliantly delivered by Carolyn.

Henry and Alice: Into the Wild is funny and entertaining with a great cast, but it might have played a little better in 2015 than it does in 2017, when everything seems more dire. Continuing through October 22.