"Goblin Market" by Theatre Elision at the Crane Theater 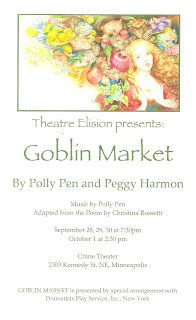 A new theater company premiered in #TCTheater this spring by the name of Theatre Elision. They're following their debut production, the lovely original musical Ragtime Women about women composers of the music known as ragtime, with the equally lovely Goblin Market. It's always interesting to see what will define a company when it starts out, and judging by their first two pieces, Theatre Elision seems to be a company that specializes in chamber musicals written by and featuring women. I don't know about you, but I think there's definitely a place for more of that in #TCTheater. They have an ambitious first full season planned with seven productions in what appears to be the same vein (although perhaps not quite as female-focused, their next show is Ghost Quartet by Dave Malloy, creator of Natasha, Pierre, and the Great Comet of 1812). If beautifully performed, small, intimate, original or rarely produced musicals are your thing, you definitely need to check out this new and exciting entry to the #TCTheater scene.

I don't know where to begin describing the loveliness of Goblin Market. Do I start with the whimsical, charming, and slightly creepy artwork of contemporary American artist Omar Rayyan, projected above the stage? Or with the imaginative and fantastical poetry of 19th Century English poet Christina Rossetti? Or the beautiful music composed by Polly Penn, who set Rossetti's most famous poem Goblin Market to music and created this musical along with Peggy Harmon? Or the gorgeous voices of charming performances of Krin McMillen and Christine Wade? Perhaps most lovely of all is the way all of these different artists and their art come together to form a magical little music/theater/poetry/art experience.

Goblin Market tells the story of two sisters, the adventurous Laura (Christine) and the more cautious Lizzie (Krin). One day, Laura is seduced by goblins selling the most delicious and luscious fruit. She falls from this great high into a deep depression that worries her sister, so Lizzie sets out to find the goblins and buy some fruit to save her sister. Kind of a silly little plot (and fruit may mean something else here), but the words and music are so beautiful and create such a picture in your head of this magical, mystical, dangerous world.

Christine and Krin have individually beautiful voices that blend together beautifully in harmony on this lovely score (and they're unmiked, my favorite!). An onstage four-piece band (led by Harrison Wade on piano) accompanies them. A Victorian settee and an old trunk are the main set pieces, in front of draped fabric, which is really all that's needed to set the scene at the Crane Theater.

One more thing to note about Theatre Elision - all of their shows appear to be one weekend only, so plan accordingly. Three more chances to get lost in the Goblin Market, and then look ahead to what else is on their schedule this season.