The 2017 Ivey Awards at the State Theatre 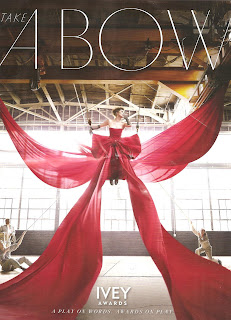 On Monday night, #TCTheater celebrated another year of amazing theater with the Ivey Awards. This was my 11th time attending the awards, and despite being the first award show after found Scott Mayer stepped down, the transition was seamless and it was another wonderful evening. Pre- and post-show parties (with plenty of opportunity for mingling with your favorite #TCTheater artists) were held at Crave, which despite being a bit crowded was a great location (I suspect they might have used their rooftop space if it wasn't cold and raining). The show was hosted by Mark Benninghofen and Thomasina Petrus (charming and funny, and Thomasina wowed with a musical medley during the In Memoriam segment), directed by Whitney Rhodes, written by Lauren Anderson and Joy Dolo, and with a fab onstage band directed by Denise Prosek. Read on for a list of winners and performers, and a few thoughts about the show.

Award recipients (click on show title for my thoughts):
Performances:

A few thoughts:
Until next year, theater friends. Go see some #TCTheater!