"The Nether" at Jungle Theater 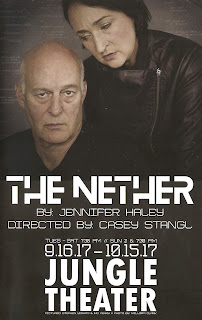 If you want to be super creeped out by technology and where our increasingly tech-dependent society is heading, go see The Nether at the Jungle Theater. This intense 90-minute sci-fi thriller is set in the not to distant future in a world that looks not that different from our own. Like HBO's Westworld, with which it shares more than a few similarities, it asks questions about morality and ethics in uncharted technological territories, without providing the answers. The Nether is frightening and eerie and thought-provoking and extremely disturbing. And I loved every minute, thanks to the taut direction by Casey Stangl, excellent cast, and stunning design.

The story takes place in two locations - interrogations (with black and white mirrored video projections designed by Kathy Maxwell) led by Detective Morris (a formidable Mo Perry), and "the nether," which is what our internet has evolved into. In this world, the majority of work, school, and socialization occurs in "realms" within the nether, a sort of virtual reality where people take on avatars (if I remembered that movie I might say this play shares similarities with it too, but I don't). Morris is interrogating two men. She's trying to build a case against one of them, a Mr. Sims (a terrifically terrifying Stephen Yoakam), who has created a realm called "the hideaway" in which pedophiles can do what pedophiles do with young children. Except that the children aren't really children, their "behinders" are consenting adults, and it's virtual reality so it's not really happening. Or is it? Mr. Sims (who calls himself Papa in the hideaway) talks about a world without consequence (which sounds like a line right out of Westworld), and isn't it better that the pedophiles satisfy their urges in a world where no one gets hurt, instead of with actual human children? Maybe he has a point, as disgusting as the hideaway is.

But of course, it's not true that no one gets hurt. As Sims himself says, "just because it's virtual doesn't mean it's not real." The other interrogee is Mr. Doyle (Craig Johnson, whose portrayal of this sad man broke my heart). Doyle goes from being a client in the hideaway to a permanent resident, and is even considering becoming a "shade," which is a person who checks out from the real world entirely, going on life support and living entirely on the nether. The story of who Doyle is and why he's so taken with the hideaway is one I won't spoil here.

The hideaway is set in the Victorian era, and visually stunning, thanks to Lee Savage's set design, Mathew J. Lefebvre's lovely period costumes (juxtaposed with the interrogation futuristic black), and Barry Browning's lighting design, which almost blinded me with the harsh interrogation lights (it's a smashing effect, but people with light sensitivities might want to shield their eyes). Rather than depict the house of the hideaway, instead we see only a gorgeous and dreamlike forest, into which a few period pieces of furniture are brought. It's here we meet young Iris (a precocious Ella Freeburg) and Agent Woodnut (an always charming JuCoby Johnson). Woodnut enters the hideaway to collect evidence, but is soon drawn into the very world he was sent to destroy. And that's where I'll stop because I don't want to say too much; there are some neat twists that I for one did not immediately see coming.

The Nether continues through October 15 and is actually a great contribution to the Halloween theater season. Go see it if you dare.