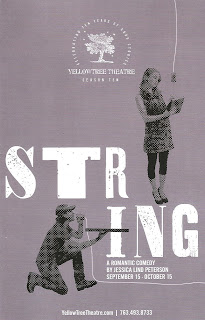 Seven years ago, just a few months after I started this #TCTheater blogging adventure, a friend told me about this little theater in a strip mall in Osseo. Since at the time I worked just a few miles away, I organized a group of coworkers to go see a play after work one day. That play was String, and the theater was Yellow Tree Theatre. I may not remember details of the show (I've seen a lot of theater in the intervening years), but I remember being so charmed by the experience at Yellow Tree's warm, inviting, intimate space that I've returned to see just about everything they've done, from goofy holiday comedies, to new original musicals, to classics of the American theater, to silly farce, and everything in between. As I've seen this blog grow beyond my wildest dreams to a place where I cannot possibly see all of the theater I'm invited to, people inexplicably know who I am, and I am given press comps to any theater in town, Yellow Tree has seen their theater grow to a place where now, in their 10th season, they consistently sell out shows, attract some of the top talent in #TCTheater, and have increased diversity of programming and artists. To celebrate, they're bringing back String, written by Yellow Tree co-founder Jessica Lind Peterson and co-starring her and her husband and co-founder Jason Peterson, their first time on stage together in years. If you're a Yellow Tree fan, it's a wonderful opportunity to celebrate this full circle moment with them, and if you've never been to Yellow Tree, it's time to make the (not that long) drive to the Northwest suburbs to see this charming, funny, quirky, sweet little play that started it all, a play that is "as Yellow Tree as plays get."


String is built around the typical rom-com triangle with a man who seems right for the woman on paper, but there's no spark. And then there's this guy who seems to be all wrong for her, but the audience can see from the start that he's the one, and the show is about waiting for her to realize it too. In this case the woman is Raina, a poet who is finishing up her graduate degree and waiting for someone to sweep her off her feet like Robert Browning did Elizabeth Barrett Browning (yup, she's that girl). Instead, she settles for literature professor Derek, who seems her type, but is more pragmatic than passionate in the way he expresses his feelings (also, if a prospective partner is allergic to your pet, cut them loose). The so-wrong-he's-right guy comes in the form of pizza delivery boy and fertilizer aficionado Ryan, who may not be the smartest or most educated person in the room, but he has the soul of a poet. He begins the process of wooing Raina, and doesn't give up until... well, we know how romantic comedies end, as this one does quite satisfactorily.

But String isn't just about young love. We also meet Raina's sister Joy, whose marriage to Cliff is going through a rough patch as he works too much and they contemplate starting a family. The two relationships are nicely juxtaposed to show different stages of love, and the sister relationship is also an important one explored in the play.

This is Yellow Tree's third time producing String, and Jessica has tweaked it a bit for this round. Jason and Jessica are seven years older than they were last time they did this play, and the characters have matured too, as has the play. It's been refined to the point where it's tightly written (with a few fun dream sequences that let us into Raina's subconscious), very clever and funny, with well-defined realistic characters. Four of the five cast members, as well as director Sean Byrd, are long-time Yellow Tree collaborators, making this feel like a warm and comfortable family affair. Real-life marrieds Jessica and Jason have great onstage chemistry, Jessica makes for a sympathetic heroine, and Jason could not be more charming as the quirky Ryan. Jessie Rae Rayle reprises her role as Joy after a break from the stage, and is just as wonderfully natural as always. Yellow Tree fave Andy Frye effectively plays the straight man in the comedy as the serious Derek. Last but not least is the newest YTT family member Ryan Lear as the adorably clueless husband.

The last time I saw String, I loved the music played during scene changes so much that I emailed the theater for the songlist, downloaded all the songs, and created my own playlist that I still listen to. It was also the first time I heard the music of Duluth-based singer-songwriter Blake Thomas, who has since become one of my favorite musicians. For this go-round of String, YTT has invited Blake to play guitar live (and sing a few times). His original music provides just the right soundtrack, and like the play is at times fun, quirky, melancholy, and poignant. (You can hear more music and comedy from Blake and Andy, as well as some other voices you might recognize from YTT, in their monthly live radio show, Take It With You - listen for free here).

The set consists of a raised platform with several steps that represents Raina's book-filled apartment, and from which a bed pulls out for a scene with the old married couple. Other scenes, such as a cafe or train station, are hinted at with a few pieces of furniture towards the front of the thrust stage. As always, they make great use of the aisles, drawing the audience even more into the story. Chic modern character-specific clothing and so-subtle-I-almost-didn't-notice-it projections complete the look. (Set design by Katie Phillips, costume design by Sarah Bahr, projection design by Phill Uttech.)

Towards the end of the play, Ryan woos Raina (this time successfully) by reciting a poem that he wrote for her, a poem that includes the phrase "yellow tree." In this art-imitates-life bit, Jessica borrowed that poem from one that Jason actually wrote for her early in their relationship, which inspired the name of the theater. And now, many years later, it's the name of the theater that they started together, that has grown to become one of the best in #TCTheater. Even though I missed out on their first two seasons, I'm thrilled to have gone on this theatrical journey with them and look forward to the next 10, 20, 40 years of seeing entertaining, challenging, diverse, inspirational, fun, great theater in Osseo!

String continues through October 15, and Season Ten continues with a remount of last year's "hilarious and heart-warming" original holiday comedy (also written by Jessica) A Gone Fishin' Christmas, the story of the first African American world heavyweight boxing champion in The Royale, and the world premiere of a new play Still Dance the Stars. It's a good time to visit Osseo. And order pizza, because you never know who might show up on your doorstep.


If I am not the right one, there has never been an ocean.
A yellow tree never grew where it grew.
The sun never exchanged places with the moon.