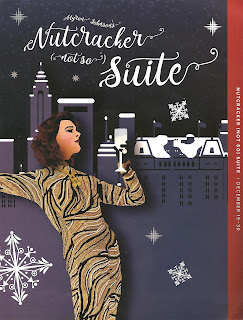 A few weeks ago, the Twin Cities Theater Bloggers were invited to a backstage tour of the Cowles Center, new home of Myron Johnson's 30-year holiday* tradition that is Nutcracker (not so) Suite, and to have a chat with one of the show's stars (and one of my favorite #TCTheater artists) Bradley Greenwald. You can read all about that fun event here, but even more fun - I finally saw the show! I had seen it two years ago, the first year it was performed by James Sewell Ballet, but Myron changes it up every year to keep it fresh, so while I knew what to expect, it was in some ways a whole new show. In all incarnations of the show, Mama Flo is the only one who speaks, and everyone else expresses themselves beautifully through movement. But this year, since Mama is played by Bradley Greenwald, she also sings. This Nutcracker diverges quite a bit from the original, but it's festive and fun and a great way to ring out 2017 with the final four performances this week Wednesday through Saturday.

This Nutcracker takes place on Christmas Eve of 1963 in a swanky Manhattan apartment, where Flo lives with her daughter Marie. The two go out shopping in NYC in preparation for for Mama's fabulous party, to which all of her posh friends are invited. After the guests arrive, Mama trots out Marie to show off her beautiful daughter, but gets a bit jealous when the attention is diverted away from herself. She makes a scene, causing Marie to run away into the mean streets of the city, where she is hit by a car and dreams dreams of her beloved Barbies come to life, and of various other dances that really have nothing to do with The Nutcracker, but are great fun to watch.

This year, Mama Flo's guests include real-life dancers, a few of which even this dance novice could identify, like Fred and Ginger, Bob Fosse, Martha Graham, and Isadora Duncan with her fatal scarf (whom I learned about from theater, of course, namely Theatre Novi Most's Dancing on the Edge). These characters parade around the party in character, and the drunken party scenes are some of the most fun of the show. In the second act, each dancer gets to show off their style in a series of scenes in Marie's bizarro dream.

Bradley Greenwald is absolutely hilarious as Mama Flo, very playfully embodying this self-centered yet loving mother. And he does it all in heels! Mama Flo has her big moment at the end of Act I, singing a medley of musical theater songs ("Everything's Coming up Roses" from Gypsy, "I Got Rhythm" from Girl Crazy, and "I'm Still Here" from Follies). When we chatted with Bradley, he talked about the difficulties of singing to a recorded track (as all of the music is), as opposed to live music with a director that can move and breathe with the show. But not only did he managed to keep up with the track, but he imbued every note with character and emotion. Watching him belt out these fabulous songs (as well as Chicago's "All That Jazz" for the Fosse number in the second act), was so much fun that I wish someone would produce a #TCTheater version of Broadway Backwards, in which men sing musical theater songs usually sung by women, and vice versa. I need more of this!

The ensemble, comprised of dancers from James Sewell Ballet as well as a few guest dancers, is incredibly talented, absolutely gorgeous dancers every one. Highlights include Deanna Gooding as Marie, with a childlike innocence and grace; Eve Schulte and Jordan Lefton as Barbie and Ken, moving with a consistent stiff robotic motion that's somehow still beautiful, and director/choreographer Myron Johnson, who danced the role of Marie's loving Uncle with much personality. The show includes a wide variety of dancing styles, all beautifully performed by the ensemble and a joy to watch.

Steven Rydberg's scenic design provides a colorful playground for this story, from Mama Flo's very '60s apartment (complete with Andy Warhol-esque portrait), to the revolving door of a NYC store, to the stark background of Marie's dreams. The costumes are pretty dreamy too, all very '60s but also specific to the characters (designed by Stephanie Karr Smith and Andrew Lester).

Myron Johnson's Nutcracker (not so) Suite continues for four more performances at the beautiful Cowles Center in downtown Minneapolis. Whether you're new to the tradition, or have seen it every year, this unique Nutcracker is a delight to behold.