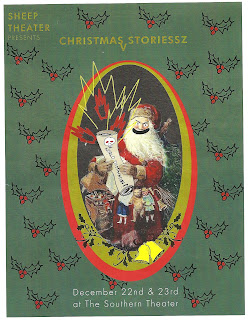 There's no better way to spend Christmas Eve Eve Eve than at an irreverent, ridiculous, super fun show by Sheep Theater. This is their fifth year presenting a series of original plays called Christmas Storiessz, about a detective in pursuit of an evil Santa. Even though I'm a fan of Sheep Theater, I've never seen Christmas Storiessz before, but no worries, there's enough exposition to catch us up to the present. But the plot isn't really what matters with this show. It's more of an excuse for Sheep to do their thing, with a little bit of holiday flair.

What's Sheep Theater's thing, you ask? A sort of campy, exaggerated, comedic, but very serious take on classic stories. This time, it's the story of Santa Claus, who in this incarnation is a criminal. Because how else does he get the money for the factory and toys and everything without being a thief? We're told that Detective Dick Mahoney (Joey Hamburger, who also wrote the show) kills Santa (Michael Torsch, also director) every year, but he keeps coming back because of the power of Frosty the Snowman (Michael Rogers). But last year, Frosty was killed too, which leads everyone to believe Santa is gone for good. Until someone starts leaving presents in houses around the country. A couple of FBI agents (Madeleine Rowe and Emily Wrolson) and their chief (Jacob Mobley) are on the case, and call in Mahoney for help. It turns out that not only is Santa alive, but he's in FBI custody. Mahoney and Santa break out of FBI jail to go looking for Frosty, which leads them to a talking candy cane named Shaky Shane (Robb Goetzke). Then we get a bit of a back story about Santa and Shane and Frosty, and, well, a whole lot of shenanigans to save Christmas, or something.

Like I said, it's not the plot, which is a bit convoluted, it's the execution. And this terrific 14-person cast really commits to the story and the style. The action is accompanied by a live soundtrack, performed by John Hilsen on keyboard. And we're treated to a very cool, sort of emo version of "Frosty the Snowman" sung by Frosty himself (Michael Rogers, the only time I could understand what he was saying). Perhaps best of all, everyone is in their pajamas (mostly one-piece), which I wish I would have known so that I could've worn my pajamas too! Pajama theater - let's make that a thing.

You have two chances to spend your Christmas Eve Eve with Sheep Theater; Christmas Storiessz V: Silent Night has two performances tonight at 7:30 and 9:30. With a running time of just over an hour and a price of $10, it's a fun, easy, inexpensive, original way to celebrate the holiday with a little #TCTheater (you can read about all of the holiday shows I've seen here).