"Coco's Diary" at the History Theatre 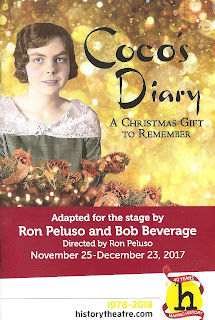 For their contribution to the #TCTheater holiday* season, History Theatre is bringing back their original play from five years ago, Coco's Diary, now with Christmas music and decorations! But it isn't really about Christmas of course, it's about a year in the life of a real live 13-year-old girl in 1927, living in what is now the Governor's Mansion on Summit Avenue in St. Paul. Adapted by Artistic Director Ron Peluso and Bob Beverage (the latter also choosing a selection of period tunes), Coco's Diary is, like Coco herself, quite charming. This play with music gives the audience a glimpse into the life of the wealthy on Summit Avenue in 1927, and reminds us that being 13 is the same no matter when or where you live.

The play begins on Christmas of 1965 (hence the holiday tie-in) with Coco and her older brother Tom reading her 13-year-old diary and saying goodbye to their childhood home, soon to be donated to the state of Minnesota. As Coco and Tom read from the diary, the 13-year-old Coco appears, and the three take turns reading directly from the diary and acting out the scenes, with the two grown-ups playing multiple characters from old to young. Coco's escapades include getting caught stealing silverware at school to protest the dreadful lunches, sneaking out to dances, setting off the fire alarm, and otherwise getting into trouble "through no fault of her own." Through her writing, Coco emerges as a smart and precocious young woman with the world ahead of her; by all rights she should have grown up to be the governor living in that mansion, if only the opportunity were open to her (read about what really happened to Coco here).

The History Theatre wisely brought back Andrea Wollenberg and Jake Endres from the 2012 production to reprise their roles as adult Coco and Tom, et al. Both of them have so much fun playing kids, parents, teachers, beaux, and everything in between. And both sing and play the piano beautifully. This is not a musical, rather the music is woven in organically as Coco remembers a favorite song or dance. As is usually the case, music makes the storytelling stronger and the time period more tangible. New to the role of Coco this year (since the 2012 Coco is probably in college now) are Dora Dolphin and Arden Michalec, who alternate performances. I saw Dora in the show I attended, and she is quite the spitfire as Coco, charming and lively and completely holding her own with the two "pros."

Coco's Diary gives us a peek inside the mind of a 13-year-old, that anyone who knows a 13-year-old will recognize. The day-to-day activities may have changed (from dances and sailing on the lake to... whatever it is that kids do today), but that feeling of everything being of utmost importance is the same. A 13-year-old's diary is the perfect thing to dramatize, because no one does drama like a 13-year-old.