"Annie" at the Ordway Center for Performing Arts 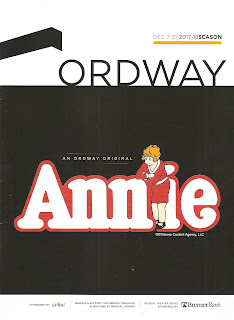 "The future is female." If the main stage at the Ordway Center for the Performing Arts is any judge of it, this statement is true, and gives one hope for the future. The story of one 11-year-old girl who changes hearts and minds with optimism and determination is an inspiring one, as is the boundless energy and talent of the young females on stage who bring this story to life. Watching Annie last night, I couldn't help but feel nostalgic for the Great Depression, when at least the president cared about the people and developed (with Annie's help of course) a New Deal that would help lift the country out of poverty. A stark contrast to today's reality, when the current resident of the White House seems to care only for the rich, and those in need get served newly crappy deals nearly every day. Maybe we need to send Annie to the Washington to get Democrats and Republicans singing together about the hopeful future of America! In the meantime, head to the Ordway to see this swell production of an American musical theater classic and get your dose of optimism about our female future.

Nearly everyone knows Annie from the 1982 movie (or today's youngsters from the 2014 modern remake), but as the smart little girl sitting in front of me said, "that's what happened in the movie, but sometimes plays are different." (Aside: it was so wonderful to see so many children in the audience at the Ordway, most of whom seemed thoroughly engaged, even the little monster behind me kicking my seat and explaining loudly the ending of the movie. A price I'll happily pay to get more kids into theater.) So unlike the movie, there are no dramatic chases around NYC, and the parentage scheme gets neatly debunked offstage. But what will be familiar to movie-goers is the group of smart and strong little girls, led by the smartest and strongest, who set off to find a better life than the one in the orphanage led by mean old Miss Hannigan. And the heart-warming love story of a father and child who find each other and start a family. Of course the happy ending doesn't come quite so easily in real life. We may not have orphanages anymore, but there are many older children in need of families and homes to call their own, and the Ordway is partnering with Ampersand Families to bring awareness to this issue. To learn how to help or begin the process of welcoming a child in need into your home, visit their website.

Direct from the original cast of School of Rock on Broadway, Carly Gendell is a star as Annie (with local actor Lilian Hochman playing the role at matinees). With a great big voice and personality to match, she's an Annie to believe in. She's surrounded by six local kids as the other orphans, found through an open casting call at the Mall of America this summer (Erika Dierke, Audrey Mojica, Brianna-Marie Mraz, Josie Turk, Valerie Wick, and Olive Middleton as the littlest and spunkiest orphan Molly, always my favorite). They're all fantastic - poised, confident, and total pros. These seven "Little Girls" are the heart of the show, and it wouldn't work without their openness, energy, and talent.

The adults are pretty good too. Broadway actor Lance Roberts' Daddy Warbucks is more jolly than scary, making it easy to see why Annie wants to be with him. Our very own Ann Michels is a dream as Warbucks' assistant Grace (with the most divine wardrobe, more on that later). Another Broadway actor, Michele Ragusa, comes close to stealing the show as Miss Hannigan. I know we're supposed to hate her, but I sure did love her; her experience on stage shines through in every moment, big or small. As Miss Hannigan's con artist brother Rooster, Britton Smith is simply fantastic. How can we convince him to stay in the Twin Cities? Along with a great turn by local actor Cat Brinidisi as Rooster's ditsy girlfriend, this trio is the highlight of the show (after the orphans, of course). The ensemble is filled with too many talented #TCTheater actors to mention, all of whom bring great life and personality to the multiple roles they play (with honorable mention for Elise Benson, appropriately and prophetically singing "A Star to Be"). Oh and of course, the other star of the show is the famous canine Marti as Sandy, reprising her role from the 2014 movie, looking adorable and hitting every mark (in exchange for treats).

Director Austene Van is among the welcome wave of female #TCTheater actors turning to directing (read more about that here), and she handles this huge show on a huge stage expertly. There's so much going on but it never feels too busy or chaotic, scenes flowing smoothly from tender moments to an explosion of action. Lewis E. Whitlock III thoughtfully choreographs this show that's less about big dance numbers and more about character movement. And Musical Director Jeff Rizzo and his fantastic 14-person pit orchestra make this familiar and beloved score come alive.

Annie is very specifically set in NYC, and the set design (originally by Ming Cho Lee from some other unnamed production) recreates the greatest city in the world in a mostly two-dimensional way, using a combination of massive set pieces (that staircase) and backdrops. The costume design was also borrowed (Aaron T. Chvatal based on Theoni V. Aldredge's design), and is luscious and colorful (perhaps too colorful, I'm not sure why Warbucks' male household staff are dressed for Oz in the first act). From Grace's aforementioned wardrobe, truly divine in a tailored '30s kind of way (I lost track of how many gorgeous coats she wears), to the orphans' appropriately shabby clothing, and everything in between. Plus, it's winter so everyone has matching coats and hats (the best part of winter).

Annie is a heart-warming choice for your #TCTheater holiday season (read about all the holiday shows I've seen here). A sweet, inspiring, beloved story well told by this large, talented, and mostly local cast and creative team, enjoyable for adults and children alike. Continuing through December 31 as the Ordway Center for the Performing Arts in downtown St. Paul, across the street from the magically lit Rice park.