"It's A Wonderful Life: A Live Radio Play" at the St. Paul Hotel 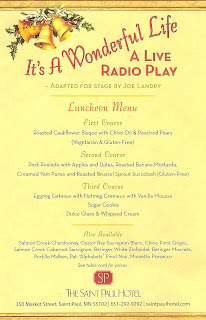 #TCTheater friends, there's a well kept secret in town. At least I've never heard of it in the theater world, but my parents have heard of it from their favorite radio station (and the one I grew up listening to) WCCO. Every holiday* season at the beautiful St. Paul Hotel, there is a charming performance of It's A Wonderful Life: A Live Radio Play accompanied by a three-course meal. My mom has been wanting to go to it for several years, but it has a loyal following and is a tough ticket to get. We finally got in this year, and I was surprised at just how much I enjoyed it. Now in their 12th season with the same cast, this company puts on an entertaining show filled with nostalgia and the warmth of the holidays, with a lovely meal (see menu to the left, vegetarian options also available). Performances continue through December 24 and are sold out except for a few dates. Or you can listen to a live broadcast of the show on WCCO on December 17 at 7 pm, with a re-broadcast on December 24 at 5 pm.

In this adaptation of the classic 1946 movie, written by Joe Landry in 1996, the acting company (Adena Brumer, Christopher Whiting, Jennifer Edwards, Jim Cunningham, Philip Callen, Ross Young, and Kevin Dutcher on piano) play radio actors who act out the story for a radio broadcast. It's Christmas Eve of 1946, so there are radio ads, period songs before the show, and of course, sound effects (provided by Christopher Whiting). The meal is served during the pre-show entertainment, with the third course (dessert!) at intermission, so there's little interference when the main story starts. These six actors play all of the roles in the film, transforming into different characters only by changing their voice and the way they speak. After 12 years they've become experts at recreating these characters and the lines we know so well (my favorites: "Zuzu's petals," "my mouth's bleeding, Bert," "Merry Christmas, you old building and loan," "why this old thing? I only wear it when I don't care how I look," and of course, "every time a bell rings, an angel gets its wings"), and appear to be having as good a time as the audience.

Watching the cast dressed in period clothing (designed by Rebecca Ballas), speaking into the big old style microphones, with WCCO radio signs overheard, one does feel transported back to the '40s, watching classic entertainment. The story of George Bailey, a hard-working family man down on his luck, is such a moving and inspiring one, even 70 years later. In fact, watching it today, when the Mr. Potters of the world seem to dominate, it's perhaps even more meaningful. It gives me hope that maybe, just maybe, if we do all stick together and support each other like the people of Bedford Falls, and remember that friendship and community are more important than money, we can defeat that mean old Mr. Potter. For it's true, "no one is a failure if they have friends."

This show definitely appeals to the crowd that listens to WCCO and feels nostalgic for a time when gas was 15 cents a gallon. But there were many families in attendance too, and a good time was had by all. It's a sweet, funny, nostalgic show, and creates all the warm fuzzies that the movie does. But live in person! It's A Wonderful Life: A Live Radio Play is a secret no longer. (Click here for more information.)