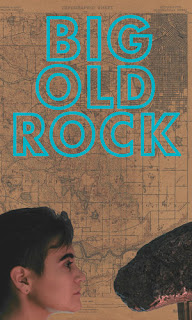 #TCTheater artist Jay Own Eisenberg is presenting his original solo piece at Open Eye Figure Theatre, thanks to the Minnesota State Arts Board, which makes wonderfully unique and creative art such as this possible for many artists. Big Old Rock is ostensibly about geology, and one geologist in particular, but it's really about so much more than that. It's about transitions, and change, and being OK with where we are right now. It's also funny, playful, thoughtful, and surprisingly poignant. Just a few more performances remain this week; check it out to learn about rocks, and maybe some other stuff too.

The beginning of the show is completely wordless, as we watch out intrepid wannabe geologist Nate in a typical day. Which mainly consists of various calisthenics, drinking coffee, and hanging out with rocks. In the second half of the show, when Nate's multiple rejection letters turn into an offer to give a talk on geology, we learn how much Nate has always loved rocks, and how he decided to study them and become a geologist. He is fascinated by the rock cycle, in which rocks change very very slowly over a long period of time. He attempts to speed up that process so that we can physically see the rock change. The experiment doesn't go quite as planned, but like any failed experiment, he still learned something important. Transitions take time, and perhaps we need to let them take their time, and be OK with where we are in this very moment.

At just over an hour, Big Old Rock is very a very cohesive, thoughtful, detailed show. I love silence in theater, and the whole wordless stretch is a beautiful dance. Interesting details like a bicycle that powers a coffee pot, the careful arrangement of props and set pieces, and the perfect choice of music all speak loudly in the silence. And an overhead projector with transparencies that have to be moved and written on by hand is so much more interesting than a computerized power point presentation, and provides more insight into the character. Of course a one-person show is never just that, and Jay gets great support from director Katherine Pardue, sound designer Dan Dukich (with those perfect songs played at just the right time), lighting designer Katie Deutsch (helping set the mood and location), and even stage manager Brian Hirt (who almost becomes a character in the play).

The show starts off as simply amusing and entertaining, until we enter deeper waters and more clearly see the metaphors that are being drawn. Like rocks, we are all constantly changing, whether we're aware of it or not. Sometimes the changes are big, like the changes that transgender people like Jay go through, and sometimes the changes are smaller. The idea that it's not about where we came from, or where we're going, but where we are right now that matters, is a lovely and poignant one.