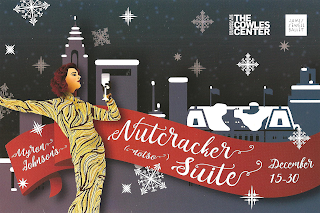 Myron Johnson's unique creation Nutcracker (not so) Suite has been around for 30 years, but I first became aware of it two years ago when James Sewell Ballet Company first presented it at the Cowles Center. Before that, Myron's company Ballet of the Dolls performed it at various locations around the Cities, including their home for many years, the Ritz Theater in Northeast Minneapolis. As a theater geek who loves to watch dance but doesn't usually have time to fit it into the busy theater schedule, Nutcracker (not so) Suite is theatrical enough in its storytelling to give me an excuse to go. Especially this year, with one of my absolute favorite #TCTheater artists, Bradley Greenwald, joining the show! Not the classical Nutcracker, but rather an adaptation of it set in 1960s NYC and featuring pop music and an array of dance styles, I described it as "delightfully bizarro." I'm looking forward to revisiting it again, and even better - the Twin Cities Theater Bloggers were invited on a backstage tour of the Cowles Center and a happy hour chat with Bradley. Read on for more on this fun TCTB event, with pictures! And be sure to visit the Cowles Center website for more information (discount tickets available on Goldstar).

If you've never been to the Cowles Center on Hennepin Avenue in downtown Minneapolis, it's worth a visit. This new facility opened in 2011 and joins the historic Masonic Temple (on the 8th floor of which resides Illusion Theater) and the old Shubert Theatre, moved to it's current location and renamed the Goodale Theater. Here are a few images from our tour of the building.


Next we went backstage at the Goodale and perused the props, costumes, and sets. There we met scenic designer Steven Rydberg, who was inspired by his childhood in the '60s and artists of the period, and creator/choreographer Myron Johnson. He said that he changes the show at least somewhat every year, tailoring it to that year's performers. And since this year we have the extraordinary talents of Bradley Greenwald in the show, that means that Mama sings (I'm quite certain that Bradley singing "Rose's Turn" from Gypsy will be worth the price of admission alone). Other special guests this year include student dancers from Grand Rapids, and two dancers who played Marie in past shows.


After the tour, we headed over to a nearby restaurant to have a beer and a chat with Bradley Greenwald. It was such a treat for my TCTB colleagues Kendra (Artfully Engaging) and Becki (Compendium) and I to talk to a legend of the local theater scene. Bradley talked about his start as a classically trained singer, and his work with Theatre de la Jeune Lune, where he learned more theatrical and movement skills. He humbly said that his range (he does comedy, drama, opera, musical theater, and everything in between) came from a desire to be employed, and a drive to learn new skills. He also talked about his interest in adapting work for the stage, including a residency with Open Eye Theatre to create a new work about the history of the neighborhood in which Open Eye resides (see also the gorgeous musical adaptation of Cyrano, C.).

Thanks to the Cowles Center for hosting us! A good time was had by all. 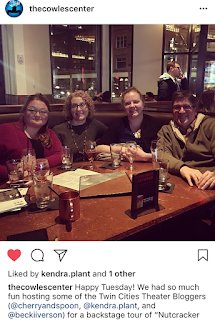