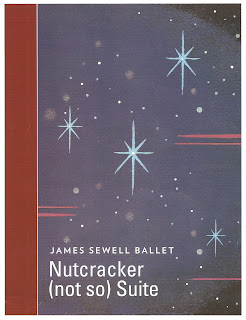 "Once upon a time, not tutu long ago,
On the Upper East Side, lived Marie and mother Flo.
With loads of her Barbies, nothing meant more,
to Marie who'd spend hours behind the closed door.
But the Eve is upon us. It's Nineteen Sixty Three!
Marie's run away but doesn't get far,
while crossing the street she's bumped by a car.
Dreams dark and scary race through Marie's mind,
But Barbie is coming, Ken's not far behind!"

The delightfully bizarro Nutcracker (not so) Suite is described thusly. While I admittedly have never seen the original Nutcracker ballet (disclaimer: I'm a theater geek who doesn't know much about dance), the plot sounds fairly similar - after a Christmas Eve party, a young girl dreams of strange and enchanting things. But this Nutcracker, originally created by Myron Johnson for his company Ballet of the Dolls and presented this year by James Sewell Ballet, is set in late '60s NYC. The young girl in question is the neglected only daughter of a boozy mother, and the dolls she dreams about are her beloved Barbie dolls. For any little girl (or boy) who ever dreamed her (or his) Barbies to life, this Nutcracker is a bewitching delight.

After a full day of shopping in the city, Flo and her daughter Marie prepare for her Christmas Eve party. Flo is the only character who speaks, the rest of the story is told through music and dance. The fashionable guests arrive and the dancing and gift-giving begins. Flo imbibes a little too much and causes a scene (appropriately to Bernadette Peters singing "Rose's Turn"), breaking up the party and prompting Marie to run away into the dark and seedy city. After being hit by a car, she dreams weird dreams of Barbie, Ken, her mother, and other people she knows until, like Dorothy, she realizes that there's no place like home and is brought back to the mother who, despite her faults, loves her and welcomes her home.

As someone who loves to watch dance but doesn't get a chance to often enough, this theatrical show was a fun and accessible way to dip my toes in the world of dance. Here are a few of my favorite things about the show:
Nutcracker (not so) Suite was the first in a two-show day at the Cowles Center (show #2 was Miss Richfield 1981 upstairs at Illusion Theater, more on that soon), and an excellent addition to my holiday theater season. You might want to consider including it in your holiday theater schedule as a break from, or complement to, the usual fare. Continuing at the Cowles Center through next weekend only (discount tickets available on Goldstar).