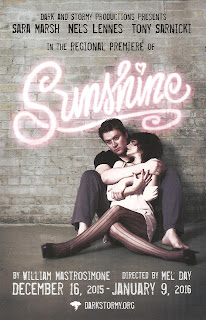 After a string of 11 holiday shows, it was time for a palate cleanser. Dark and Stormy Productions once again fulfills that space with their "anti-holiday programming," this year with the dark comedy Sunshine by William Mastrosimone (whose much darker and much less comedic Extremities they tackled this summer). But at its heart this really is a sweet story about two (or three) people who are looking for love in all the wrong places (to quote a great old country song). Presented in an intimate and appropriate non-theater space, with a terrific three-person cast, this is another strong showing from Dark and Stormy that serves as a nice cap to their third season.

In 1995 Providence, RI, Sunshine is a dancer in a booth, where men pay to look but not touch, the glass always between them. She says that she feels loved and valued in the booth, as opposed to her real life with her abusive husband. One night she crashes into Nelson's apartment (and his life) in an attempt to escape her husband's angry mood. Nelson is in a dark place, frustrated with his stressful and demanding job as an EMT and desperately trying to cling to his failing marriage. What follows is one long dance of a conversation between these two characters, as they challenge and comfort each other. God bless the day these two lost souls discovered each other, looking for love.

Extremities director Mel Day returns to direct Sunshine, which is lighter but still intense and with some heavy themes. The meat of the story is a two-person play between Sunshine and Nelson, bookended by scenes in Sunshine's booth featuring Tony Sarnicki as one of her clients - a sweet and shy college kid in the beginning, and turning a complete 180 into a broken, devastated, wreck of a person at the end. I don't know how he gets to that place with no (on stage) transition in between, but get there he does, and how. Artistic Director Sara Marsh is a delight as the titular character, bringing back her Providence accent from the very first Dark and Stormy production, a trio of short plays under the title Outside Providence. Sunshine (her stage, er... booth, name) is one of those simple and seemingly simple-minded characters who may actually be the smartest person in the room, trying to better herself with her word-a-day calendar (today's word, besmirch, which may not mean exactly what she thinks it means), and doling out advice that she herself seems reluctant to take. Nels Lennes gives a quiet and understated performance as Nelson, but really reaches the height of emotions (both high and low) when called upon. In this small space you're almost uncomfortably close to this intense encounter that feels very real.

Sunshine is presented in the same NE warehouse space as Extremities, but in a different part of the room from that still scary fireplace. As we move from Sunshine's "live girls" booth to Nelson's apartment, the curtain at the back of the stage area is drawn aside, revealing windows in the brick wall that look out into the dark night and the busy lights and sounds of the city. This is the kind of authenticity of space that I've come to expect from Dark and Stormy.

Sunshine continues through January 9. Seating is limited and shows tends to sell out, so get your tickets well in advance.