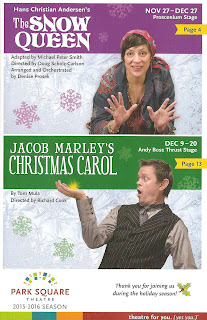 Inside Park Square Theatre on 7th Place in lovely downtown St. Paul, magic is happening. It's the magic of storytelling, something that has been happening for ages on this planet. Friends sitting around a campfire, telling stories of good and evil, trials, and friendship, with words, music, dance, puppets, tears, and laughter. This musical adaptation of the Hans Christian Anderson story The Snow Queen is something truly unique and special. It's so charming, whimsical, funny, creative, and yes, magical. But with a creative team that includes Doug Scholz-Carlson (director), Denise Prosek (music director), and Jim Lichtsheidl (choreographer), I would expect nothing less. They have assembled a terrific eight-person cast of actor/singer/ musicians (half of whom are new to me) to bring this charming fairy tale to life in an innovative and inspired way.

In this adaptation by Chicago's Peter Michael Smith, the story of The Snow Queen is told as a series of seven stories, each announced by the narrator and told through narration, dialogue, and music, all seamlessly intertwined. Gerda and Kai are best friends, until one day shards from the devil's mirror pierce Kai's eye and heart, which basically turns him into a jerk and allows him to fall under the Snow Queen's spell. She takes him away in her sled, and Gerda sets off on an adventure down the river, determined to find her friend. She meets friends and foes along the way, but eventually she is able to rescue him from the Snow Queen because of the love in her heart, and they return home, changed but still friends. It's a wonderful fairy tale about adventure, heroism, friendship, love, and home.

Although this is a musical, it's not your typical musical. The score doesn't sound like a typical musical, but rather has that folky sound that I love, played on too many instruments to count, including guitar, mandolin ukulele, flute, violin, auto harp, harmonica, and kazoo! And it follows the new trend in music-theater in which the ensemble and band are one. A trend of which I heartily approve because it makes for some seamless storytelling with no separation between song and dialogue, between band and cast. I imagine this can make casting difficult because you need to find people that can act, sing, dance, and play a musical instrument. But this cast is full of such quadruple threats. And they are an ensemble in the truest sense of the word, each with a part to play and a time to shine, and a time to sing or play in the background, but always fully invested in the storytelling. Most cast members play multiple parts (and instruments); here are some highlights from each one:
Erik Paulson's sparse set is the perfect playground for the cast, with four ice-like moveable panels used for video projections or shadow play, and two staircases on wheels that utilize the vertical space. I am in love with Rebecca Bernstein's costumes. They have a sort of bohemian, almost '70s feel, with a color palate of warm earth tones in oranges, reds, browns, and golds, and an ingenious mixing of patterns that would thrill any Project Runway judge. Coats, shawls, sweaters, hats, and other winter attire are layered over dresses, tights, and boots in a delight of mix-and-match.

The only flaw in this piece is the intermission. With a running time of under two hours including intermission, it doesn't need one. And more importantly, this is a story so magical and spellbinding that the intermission only serves to break the spell and jar the audience out of the experience and into harsh reality. I would much prefer to stay in the fairy tale world for 90 minutes or so until I have to leave it to go back to my real life. In fact, this is a show that I wish I could see again. There are so many little details to watch, and it feels like the kind of show that will just get looser and more playful as the run goes on.

The Snow Queen continues at Park Square through December 27. Get your tickets now to experience this magical, musical, charming, spellbinding, innovative storytelling!